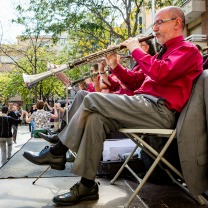 The tenora is a double-reeded oboe-like wind instrument, considered to be a descendent of the shawm, which was played across Europe from the Middle Ages up to the 17th century. Since then it has envolved independently in Catalonia, where it has become one of the instruments most representative of indigenous music and the true star of the music for sardana dances. It would seem that it owes its name to the instrument it arose from, the tenor shawm.

It is around 25 cm long and made up of three main pieces: the upper and central sections, and the metal bell. It plays thanks to the vibrations of a double reed fixed to a support. Like many other wooden instruments of the cobla music group, it is made from the jujube tree, a fairly rare shrub native to the Mediterranean. There are two tenores in a cobla and they sit in the first row with the other woodwind instruments. As it is the deepest instrument in its family, the two tenores are located on the right-hand side.

The version that we recognise today was invented in the middle of the 19th century by the musician and instrument maker from Rousillon, Andreu Turon. As he was an oboe player, he took advantage of the recent improvements to oboes and clarinets and applied them to the tenora. He made it longer, added a system of keys, and the characteristic metal bell.

It was publicly presented in 1849 in Perpinyan. No one knows for sure if the improvements of the instrument were commissioned by Pep Ventura, but he did play a prominent role in the reform of the cobla during this period. These changes meant that the tenora was introduced throughout Catalonia along with the new cobla. In addition, the fact that Ventura was a great tenora player could explain why this instrument has such an important solo role in the group.