The castanaya, or chestnut, is the fruit of the chestnut tree and one of the most popular autumn foods. Today it is typical to eat them for All Saints, boiled or roasted. But in the past it was an important ingredient in Catalan cooking. Before new products arrived from the Americas, chestnuts usually took the place of potatoes in lots of dishes, such as creams or to accompany meat.

Today, in Barcelona and around Catalonia, chestnuts are the main food people eat for All Saints, together with little cakes,panellets, and sweet potatoes. Castanyades are organised round that time and the city is full of stalls selling them, wrapped in paper and piping hot, while that special smell of roasted chestnuts is in the air.

Historians believe the chestnut tradition derives from the food at funerals in olden times, where only pulses and dried fruits were served, apart from the popular panellets.There was a symbolic part to the ceremony, of communion with the soul of the dead: while roasting chestnuts, people recited the rosary in memory of their family members who had died. 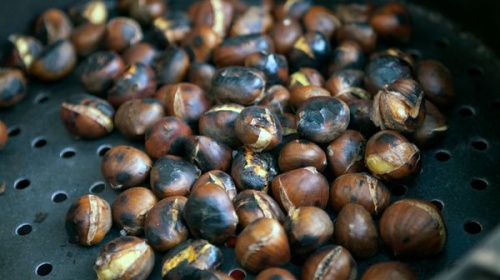