The Revetlla de Sant Joan, the St. John’s Eve celebrations, are held across the country and take many forms. In Barcelona everyone celebrates in their own way, with neighbours, friends and families getting together for an evening meal, to play music and light bonfires.

In the afternoon of 23rd June the Canigó Flame reaches Plaça de Sant Jaume, where it is received by representatives of the municipal authorities, along with City’s Eagle and Giants, to a rendition of the Muntanyes del Canigó. Then the representatives of each neighbourhood take the flame to light bonfires across the city.

When the bonfires are lit the celebrations, the revetlles, begin in the Barcelona’s streets and squares, along with neighbourhood meals, firework displays, dances and revelry until the small hours.

The night of 23rd June is a magical night celebrating the summer solstice, just a couple of days late. The Catholic Church combined it with a celebration of the birth of St. John the Baptist, so it has become a festival marked by symbolic elements and customs: the purifying fire, midnight bathing, the herbs of Sant Joan, songs, dances, cures and other ritual magic.

St. John’s Eve has pagan origins and is one of the solstice festivals, like Christmas. The tradition long predates the introduction of Christianity. It is from a cult of the sun, celebrating the lengthening of the day and the summer solstice.

The Nit de Sant Joan has long been celebrated in Barcelona, with bonfires at the heart of the festivities, as  it is a commonly held belief that the  flames  frighten off and dispel the evil spirits that are are abroad on this night. In fact, laws were introduced in the 18th century to curb the spread of fireworks and bonfires in the city, which suggests that by that time it was already a well-established tradition. Despite the bans and restrictions of the 20th century, though, the festival has continued to this day. 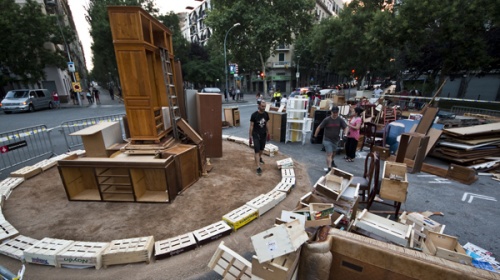 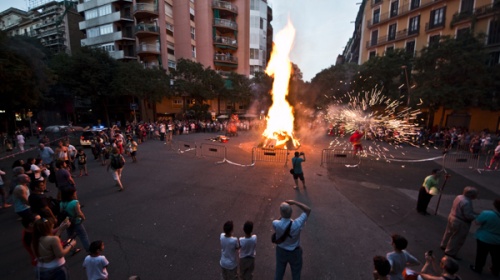 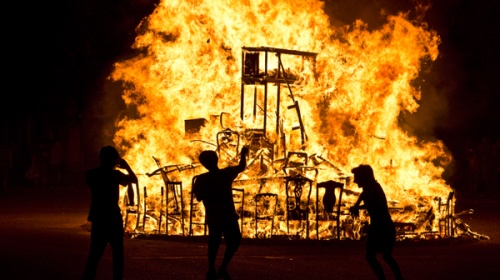 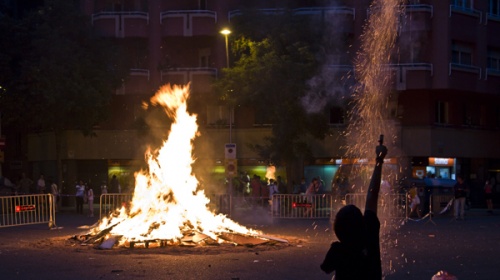 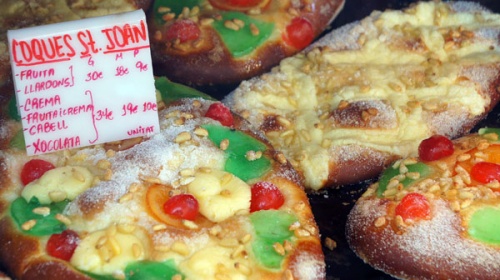 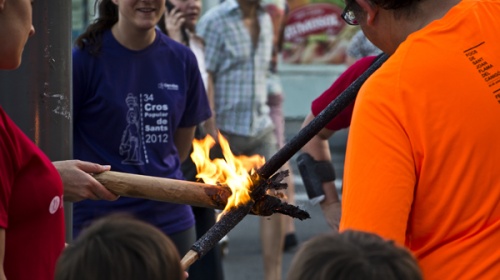 This is a night when water, considered to be a source of virtue and a guarantee of life in rural communities, is believed to be full of curative powers. Long ago taking a dip at midnight was a compulsory ritual. And it is still very common along the coast, whether for health reasons or because the temperature, setting and celebration mean people can continue partying in the sea.

The Canigó Flame. Since 1966 various groups and organisations have brought the flame down from the Canigó mountain and distributed it around the Catalan-speaking lands to light the Sant Joan bonfires. The flame remains lit all year round in Perpignan’s Castle Tower and it is renewed bright and early on the morning of each June 23rd, at the summit of Canigó. The flame has been coming to Barcelona since the 1970s.

The organisation Òmnium Cultural is responsible for the arrival of the Flama del Canigó in Barcelona and it organises an early evening reception in Plaça Sant Jaume on 23rd June. When the torch bearers arrive with the flame, the Àliga de la Ciutat (the City Eagle) and the Gegants de la Ciutat (the City Giants) escort it to the crucible in the middle of the square, to the strains of Muntanyes del Canigó (Mountains of Canigó). After speeches by the organisers and city dignitaries, the flame is distributed amongst the representatives from the different districts, who then have the job of lighting their respective bonfires.

A night of bonfires and revelry. There is no single big party for Sant Joan in Barcelona, there are bonfires and parties in all the neighbourhoods at the same time. When the Canigó Flame arrives the fires are lit but the celebration around them can take many forms: communal suppers, firework displays with diables (devils) and dracs (dragons), orchestras and bands to get people dancing, and so on. But they all have cava and coca, the Catalan champagne and sweet bread that no Sant Joan party would be complete without.

The coca de Sant Joan is the traditional food for these celebrations and today it comes in many varieties: some are topped with candied fruit and pine nuts or crackling, while others have a confectioner’s custard or whipped cream filling. It comes from the ring cake with eggs that people ate in years gone by, a large round cake, a reminder of the sun cult. According to the chef Ignasi Domènech it has to be a set size, twice as long as it is wide.

Festes.org. The place where the party starts