The festival of Sant Joan, which is celebrated on June 23, is one of the most deeply rooted popular festivals in the Catalan Countries. Fire, music, dance and coca are the protagonists. This year the festival will be very special due to the situation we are experiencing. The party will have to be held taking into account health measures and regulations.

This year, only activities that are guaranteed to meet safety distances between people are allowed. Neither parties nor mass gatherings are allowed. Some of the activities are by reservation.

The bonfires of Sant Joan have been organized and authorized as the regulations that will regulate them have become known, which have been renewed this year.

On the firecracker booths, their opening is allowed as long as they are located in the public space and comply with the safety and sanitary conditions.

As is tradition, the central act of the festival will be the Arrival of the Canigó Flame. This year it will be held again in Plaça del Rei and can only be accessed with prior reservation. As every year, the Cobla Sant Jordi - Ciutat de Barcelona, ​​the Eagle and the Gegants de la Ciutat will participate in the event. The event can be followed live on the Facebook of Cultura Popular Barcelona from 5:00 p.m. on the 23rd. La Flama del Canigó, a fire that more than fifty years ago joined the Catalan-speaking territories

One of the most distinctive rituals of the night of San Juan is the flame of Canigó, a fire that emerged at the top of this massif and that in one night extends throughout all Catalan-speaking territories to light bonfires. In addition, the fire of the Flama del Canigó never goes out: during the whole year, it remains at the Museum of the Pairal House of Perpignan until, every June 22, it is taken to the summit of Canigó. At midnight, the fire of la Flama begins the route and it is scattered and split to light the bonfires of San Juan of hundreds of towns.

This ritual began in 1955 on the initiative of Francesc Pujades, a neighbor from Arles de Tec (Vallespir). Inspired by the poem 'Canigó' by Jacint Verdaguer, he had the idea of ​​turning the fires of San Juan on top of the mountain and distributing his flame everywhere. It was not until 1966 that the fire passed the border for the first time and arrived in Vic. And the following year, in 1967, he was received at the Barcelona City Council. Despite the Francoist dictatorship, the tradition spread throughout the Catalan-speaking territories as a symbol of survival of the country's culture.

Arrival of the Flama del Canigó in Barcelona

For more than fifty years, the Flama del Canigó has arrived in Barcelona, ​​where it is received solemnly in Plaça del Rei This year will be the Giants of the City, the Eagle, music and herbal remedies for everyone! After the peveter's lighting, the representatives of each neighborhood will go up to the stage to catch the fire that will light the bonfires throughout the city. 5:45 pm - Celebration of the arrival of the Flama in Plaça de Sant Jaume. With the Àliga, the Capgrossos Macers and the Gegants de la Ciutat and the sound of the cobla Sant Jordi - Ciutat de Barcelona.

6 pm - Arrival of the Flama del Canigó in Plaça de Sant Jaume. Pillar of honor of the Castellers of Barcelona.

6:15 pm - Reading of the Flama's message, written by Eliseu Climent, and speeches.

6:45 pm - Distribution of the Flama. The teams go by to collect the fire from Canigó, which will serve to light bonfires throughout the city.

Message of the Flama del Canigó

We are language and fire. We have a language, national and non-negotiable; the one that unites and identifies us: the Catalan that underpins our culture, that conveys our ideas, that shapes our ideals and that branches out into a multitude of local formulas that make it rich.

We are also fire, I said. Primal fire, purifying and renewing life, and we celebrate it with ancient pagan rituals in the Catalan Countries. The falles of València announce the arrival of spring. A few months before, the Sant Antoni bonfires will have been lit, which we call barraques in Els Ports de Morella and El Maestrat, or foguerons in Mallorca. Correfocs and fireworks, with showy pyrotechnics, flood the streets of towns and villages in celebration with a deafening atmosphere and the sweet smell of gunpowder.

But above all we cannot forget the fire with which we celebrate the summer solstice. On the long-awaited night of Sant Joan, the flame will be lit in Canigó, which will symbolically extend from Salses to Guardamar and from Fraga to Maó, and which will be descended on foot along complicated mountain paths, from the top of our emblem-mountain, thanks to the efforts of our people.

And it is that, unlike other cultures, the Catalans men and women, from the north and the south, from the west and the islands, we are a people that walks. We walk to know and love the country. Our present still drinks from that primitive excursionism that, step by step, merged with the territory. Go through it slowly and with an attentive look, it becomes a trait of culture. Mossèn Cinto Verdaguer, Joan Coromines or Josep Maria Espinàs did it; and Perejaume with his artistic walk.

We also walk as an expression of a radically peaceful and revolutionary resistance. We have a forceful, marked, inflexible step, which unites us as a people in a single cry, filing differences, bringing looks closer. Walking has become a sign of identity itself, a gesture of freedom in the process towards national sovereignty. Remember the Marxes per la Llibertat, those human columns that entered Barcelona in October 2019. This image said it all about us.

We are like this: tongue and fire, and at the same time, and if you will allow me the ironic paradox, we are a fireproof people that obstinately forge step by step, its own future. The advice from civil protection and prevention: be careful with fireworks

Fireworks must be used with caution. Here is some basic advice to help you to enjoy a safe festive eve! Download the tips on the use of pyrotechnic articles and bonfires

Bonfires in Barcelona's squares and road junctions are the most outstanding and eye-catching part of the festive eve.

Barcelona has a long tradition of firework displays throughout this night, when kilos of fireworks are set off, giving off idiosyncratic sounds and brilliant lights. 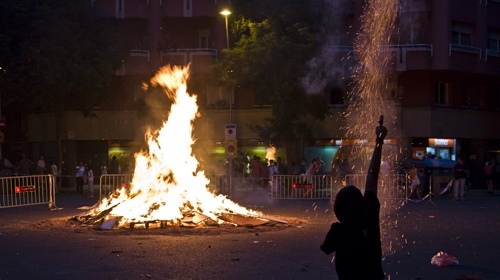 Bonfires are the central attraction of the festive eve in Barcelona, with dozens lit every year in the city. 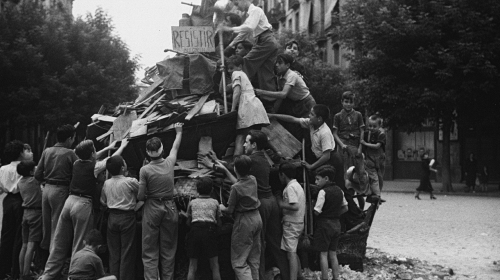 Sant Joan is a festival that has been celebrated since ancient times. Find out with these old images! 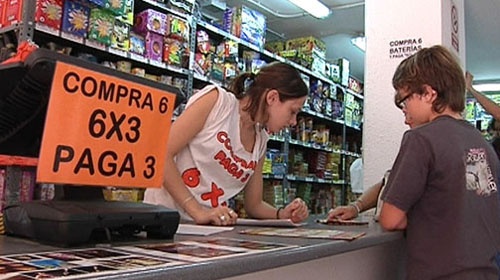 Discover all the activities you can do this magic night in Barcelona. 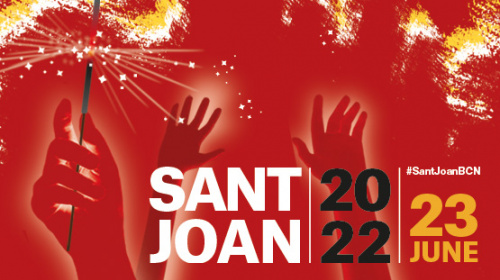 The Night of Sant Joan in Barcelona

On the night of June 23 the city transforms on the occasion of the Sant Joan eve. Take a look at the program!