Around the feast of the Mare de Déu del Carme

On 16 July various towns along the coast of Catalonia celebrate the Mare de Déu del Carme (Our Lady of Mount Carmel), the patron saint of seafaring communities. Sailors, fishermen and all sorts of seafarers revere the saint as she protects them from the most common dangers of the sea.

In Barcelona the festival is marked in Barceloneta, the city’s quintessential nautical neighbourhood. The festival is organised by the local fisherman’s fraternity, which every year, on the first Saturday after 16 July, takes the image of the saint from the local parish church out around the neighbourhood in a procession. After going around the waters of the port, the saint is placed on an improvised altar on the wharf while mass is held and offerings are made to her. Finally, the festivity concludes with a performance by a Barceloneta choir, a very traditional element in the neighbourhood.

The ritual is more or less the same everywhere: the local fishermen’s fraternity take the image of the virgin out in a procession as far as the port, where she is put on a boat. The procession continues at sea, with a varied fleet of vessels in tow. The boats normally sail as far as a significant point or landmark on the coast, landing there and holding a mass presided over by the virgin.

The aim of the ritual is to honour the Mare de Déu del Carme and ask her for protection against the most habitual dangers of the sea, such as storms and shipwrecks.

The origin of the festivity honouring Carme as the patron saint of seafarers lies with the legend explaining how she saved an English boat adrift in the middle of a terrible storm. Amid the desperation, one of the sailors started to pray, wrenching off the scapulary of the Carmelite order he was wearing and throwing it into the sea. The act immediately ended the storm. It seems the spreading of the legend helped consolidate the Mare de Déu del Carme as the patron saint of sailors and seafarers.

In the 18th century the Majorcan Admiral Antoni Barceló Pont de la Terra promoted the festivity among his men, who adopted her as their protector straight away and dubbed her ‘Stella Maris’. Little by little the devotion spread among sailors and gradually substituted Sant Elm, who had traditionally been the protector of Catalan sailors and seafarers. 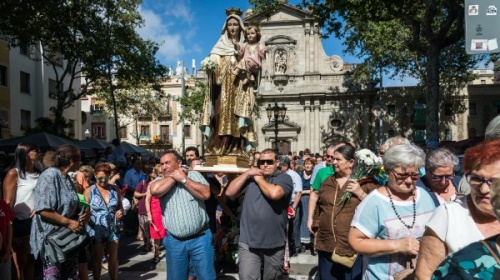 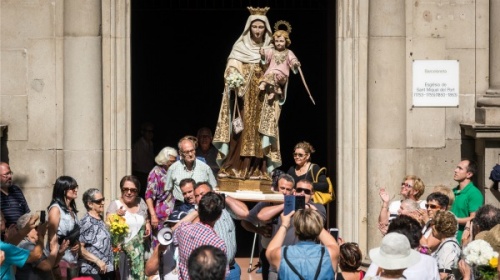 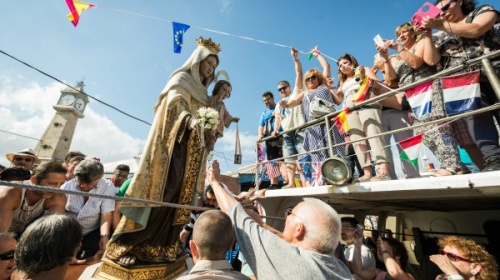 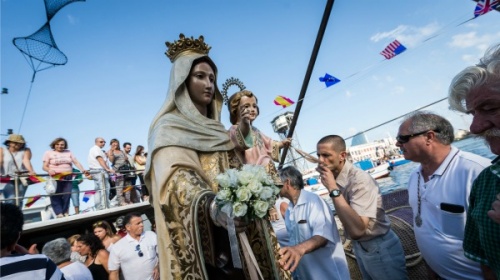 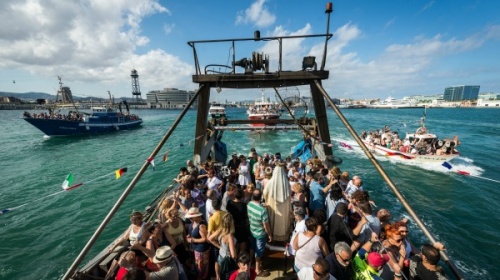 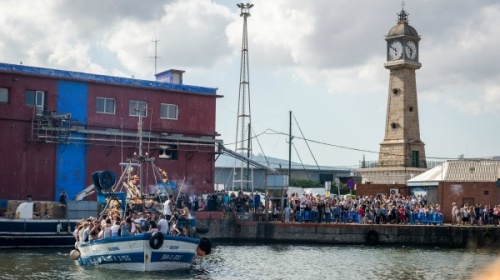 The devotion to the Mare de Déu del Carme replaced the former devotion to Sant Elm, the patron saint of Catalan seafarers, and along with Sant Pere and Sant Andreu is one of the protectors of sea communities.

Terrestrial procession. The image of the Mare de Déu del Carme, normally kept in a side wing of the Sant Miquel parish church, is taken out on a procession by the parishioners. The procession goes through Plaça de la Barceloneta and follows Passeig de Joan de Borbó before reaching the Moll del Pescadors wharf.

Sea procession. The image is then loaded onto a boat and heads the sea procession around the port for over an hour. A varied array of vessels follow behind, with fishing boats, motor boats and yachts all following the procession.

Mass. At the end of the procession, the image is taken off the boat and mass is held on the quayside itself, where the fishing nets are usually kept. A section is set aside where fishermen and their families can lay flowers and the fishermen’s fraternity, the Confraria de Pescadors de la Barceloneta, make an offering of fish.

Concert. When the mass is over, the celebrations round off with a performance by the Selectiu de Cantaires de la Barceloneta, one of the many choral formations in the neighbourhood.