Sant Jordi, or St. George, is the patron saint of Catalonia and the Diada de Sant Jordi, St George’s Day, is a festive occasion that, over the years, has become a celebration of Catalan culture. This is why many balconies in the city are decorated with the senyera, the Catalan flag, as they are on other key national dates. In fact, it is a celebration of culture and love, represented by books and roses. The main meeting point in Barcelona is the Rambla, which is packed from end to end with book and flower stalls.

On Sant Jordi’s day it is normal to find books in every language that talk about Catalonia but there are lots of stalls that specialise in books in Catalan, especiallly as this day is seen as a time for promoting and defending the Catalan language and culture.

The Festa de Sant Jordi is held across the country on 23rd April, the day St. George died. He was under the orders of the Roman emperor Diocletian and refused to obey a command to persecute Christians, so he was martyred and decapitated. Very soon he started to be revered as a martyr and fantastical stories about him began to circulate.

The cult of St. George spread throughout the Catalan Lands in the Middle Ages, though he was venerated as early as the 8th century. And since 1456 he has been the patron saint of Catalonia.

The feast day has been celebrated to a greater or lesser extent since the 16th century but in the 19th century, the rise of the political and cultural movement known as the Renaixença saw it become the most celebrated civic, cultural and patriotic day in Barcelona and Catalonia.

Barcelona was already holding a Sant Jordi rose fair in the 15th century. It was especially popular with engaged couples, newlyweds and young married couples, which makes us think that the custom of giving a rose started at the fair, held at the Palau de la Generalitat.

We can trace the feast day’s association to books back to the 1920s, when Vicent Clavel i Andrés, a writer from Valencia and the director of the Cervantes publishing house, suggested organising a festival to promote books in Catalonia to the Cambra Oficial del Llibre de Barcelona and the Gremi d'Editors i Llibreters - respectively the Barcelona Official Chamber of Books and the Publishers and Booksellers Guild. They chose 7th October 1927 to hold it on.

During the International Exhibition held in Barcelona in 1929, booksellers decided to set up stalls in the streets, to present their new publications and encourage reading. The initiative was so successful they decided to change the date and establish 23rd April as Book Day, because that is the day when two of the great names in the history of literature died: Cervantes and Shakespeare.

From the very beginning this festive occasion has given a big boost to the output of Catalan publishers and that is still its essence today. But such has been the impact of Catalonia’s book day that, in 1995, UNESCO’s General Assembly declared 23rd April World Book and Copyright Day. 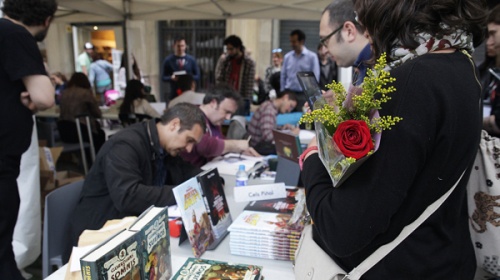 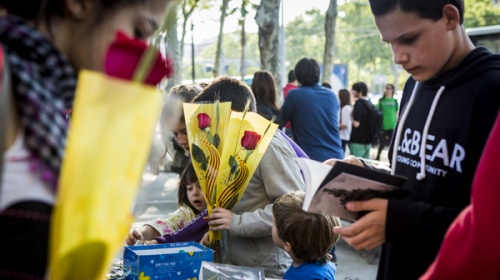 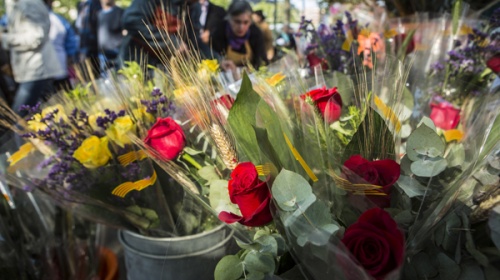 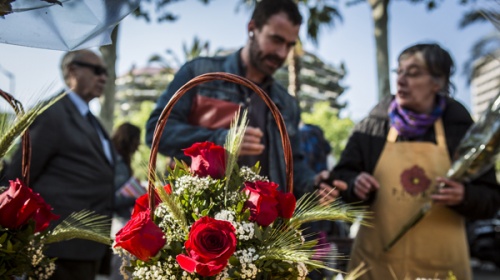 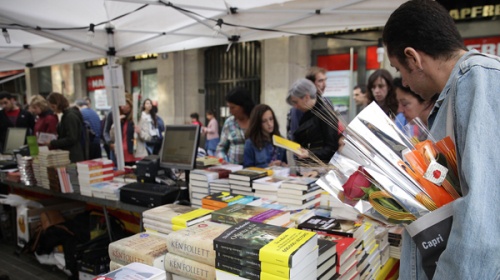 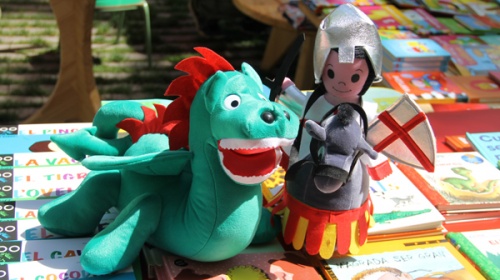 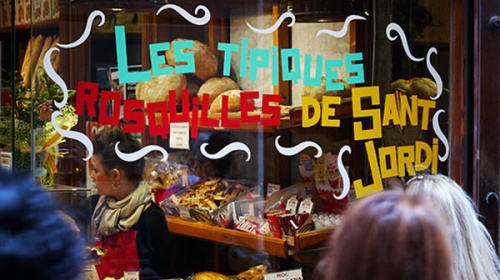 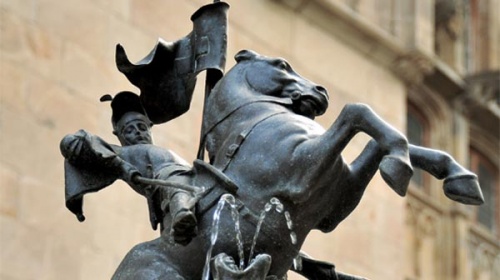 In Catalonia, lovers’ day (the equivalent of St. Valentine’s Day) is celebrated on 23rd April and it is a day when people symbolically express their love by giving each other a rose or a book. In Valencia, it is celebrated on 9th October and, in English-speaking countries, on 14th February.

Bookstalls. Since the first third of the 20th century, books have played a prominent part in the Sant Jordi celebrations. The stalls spread out along the Rambla and Passeig de Gràcia in particular but also reach nearby squares and streets, as well as the busiest parts of every neighbourhood.

Readers take advantage of the day to get their hands on new books and share their views on reading with the authors, who are often invited to stalls to sign books and recite fragments from their works, among other promotional duties.

Rose stalls. Red roses are the other star of the Diada de Sant Jordi. They are a symbol of love and, traditionally, men give a rose to their loved one. Barcelona is always full of florists’ stalls and it is estimated that 40% of all the roses sold in a year are sold on this single day.

The Sant Jordi legend. According to Catalan legend a terrible dragon was wreaking havoc among the animals and people of Montblanc. To try to contain it, they decided to draw lots to see which one of them would be fed to the beast. One fine day the king’s daughter drew the short straw and would have died at the hands of the dragon, had Jordi the knight not appeared to confront and slay it. Tradition adds that a bush of red roses sprouted from its spilled blood.

Festes.org. The place the party starts