Around the Feast of Sant Medir

Sant Medir is one of the most deeply-rooted festivals in the old town of Gràcia. It is best known for the tonnes of sweets and toffees thrown to the public from the horses, floats and lorries in the procession. The festival groups or colles parade round the neighbourhood in the morning and then set off on a pilgrimage to the Ermita de Sant Medir, the saint's shrine in the Collserola mountain range, where the pilgrims gather to pay tribute to the saint. When they come back, the colles lead a big musical parade, a cercavila, round the main neighbourhood streets, handing out sweets to the waiting public who are armed with bags, buckets and umbrellas to collect as many as they can.

But that's not the end of this tribute to Sant Medir. The Sant Gervasi and La Bordeta neighbourhoods also organise cercaviles, with their own colles, and a pilgrimage to the shrine. Once there they gather together to pay homage to the saint by celebrating mass and tying commemorative bows to each colla's banner. La Bordeta hold their celebration on the Sunday after the feast day.

Gràcia and Sarrià-Sant Gervasi always hold it on a working day, so if 3rd March falls on a Sunday, the festival is moved to the 4th. But in La Bordeta, the procession is always on the Sunday following the feast day.

The origins of the Festa de Sant Medir can be traced to Gràcia and a promise made in 1828 by the baker Josep Vidal i Granés, whose bakery was on Carrer Gran. He said that if he recovered from the illness he was suffering, each year he would go on a pilgrimage to the Ermita de Sant Medir. That year he honoured his promise for the first time and, gradually, he was joined by relatives, friends and more and more people, who later formed into groups.

On the first processions, when he had come back from the pilgrimage, the Gràcia baker threw broad beans to the public in honour of the saint who, according to legend, sowed them. But, as the years went by, the beans were replaced by sweets until it reached the point where the celebration became known as the dolça festa, the sweet festival.

This celebration is a tribute to Sant Medir, a peasant who, so the story goes, lived in the Collserola mountain range, on land near Sant Cugat. Legend tells that the Bishop of Barcelona, Sever, fled the city in 303, when the Christians were being persecuted on the orders of the Roman emperor Diocletian. And, lo and behold, when he was passing by Sant Cugat, he bumped into Medir sowing his broad beans. The bishop explained why he was going into hiding and that he was prepared to die before giving up the Christian faith. He then asked Medir to tell the truth to anyone who asked after him. Once he had gone, the broad beans miraculously started to grow.

Not long after, Sever’s'''"<> pursuers came across Medir the farmer, who told them the truth: Sever had passed by a while ago, when he was sowing beans. The men thought he was making fun of them and protecting the bishop, so they took him with them. Later, having captured both, they imprisoned them and killed them. 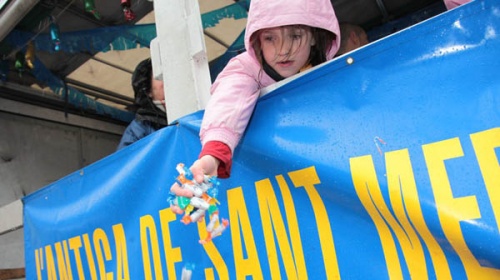 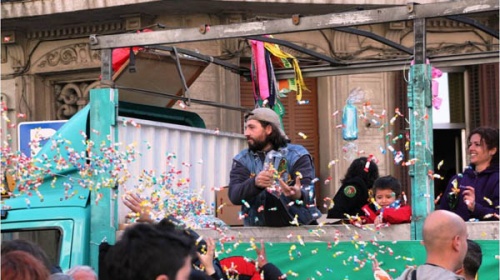 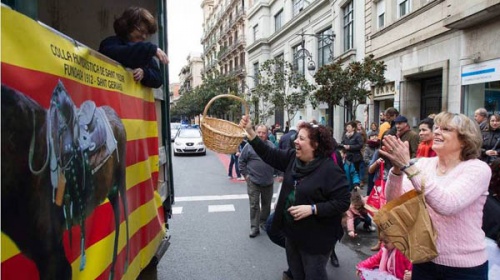 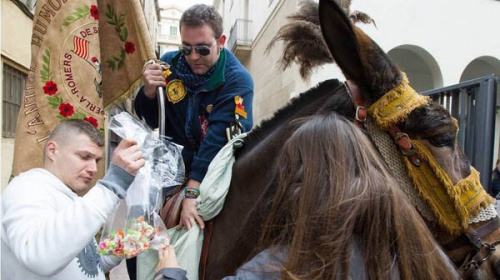 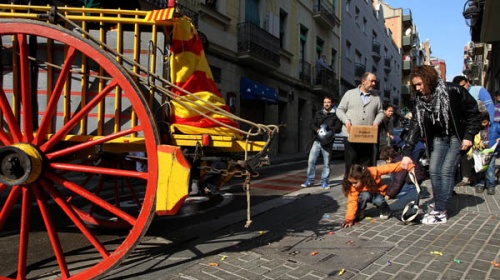 During the festival the pilgrims carry a symbolic bow, with a broad bean and small medallion of the saint, and a posy of violets, a flower that resists the winter cold and can, therefore, be seen at this time of year.

Group hike. One of the highlights among the events held in the run-up to the festival is the caminada popular, the hike the Colla Monumental organises to the Ermita de Sant Medir from Gràcia every year.

Parade and musical procession. On the morning of the festival in Gràcia, the Sant Medir colles assemble in order of seniority and parade round the neighbourhood streets before setting off on their pilgrimage to the hermitage. At eight in the evening, when they get back, they take part in the cercavila, the musical procession that attracts the biggest crowds, as young and old alike fill the streets to get hold of as many sweets and candies as they can.

They hold the cercavila on the same day as the festival in Sarrià-Sant Gervasi, too. Just as they do in Gràcia, the Sant Medir colles parade round the streets in the morning before setting off on their pilgrimage to the hermitage in Sant Cugat. On their return in the evening, they organise a big cercavila, filling the streets with horses, floats, children and sweets.

In La Bordeta they hold the cercavila on the following Sunday and go round the Sant Medir parish. The procession is formed by the Guàrdia Urbana (police) band, and groups of pilgrims on horses and lorries throw sweets to the crowds. At the end a mass is held in the saint's honour.

Pilgrimage and gathering at Sant Medir. On the feast day itself, at midday, the Gràcia, Sarrià and La Bordeta colles make their way to the Ermita de Sant Medir, where they hold a mass. After the mass they tie commemorative bows to the banners of each group.

Human towers. Every year there is a diada castellera, a human tower display by the colles castelleres from the neighbourhoods that celebrate the festival, namely the Castellers de la Vila de Gràcia and the Castellers de Sants, along with the Sant Cugat group. This itinerant gathering is held on the Sunday closest the feast day and each year it takes place in one of these three neighbourhoods.

All the Sant Medir colles are organised in the same way, as laid down in the protocol. Each group is led by the cos de bandera, comprising three riders on horses with the banner identifying the colla, which is carried by the banderer, the standard bearer. They are followed by the rest of the pilgrims, on horseback, coaches and lorries, and accompanied by bands of musicians.