The Festa de Santa Rita, patron saint of impossible things and rose hawkers, is the biggest popular religious celebration in the Raval neighbourhood. It is a day when thousands of locals make their way to the Església de Sant Agustí to venerate the saint's remains and take her roses as a reminder of one of the miracles attributed to her: making the rose bushes in the convent's garden bloom in the middle of winter.

A day, too, when stalls selling roses, prints and candles that the faithful can buy to offer the saint fill Plaça de Sant Agustí from early morning.

Rita of Cascia lived between the 14th and 15th centuries and died on 22nd May, the date chosen to pay tribute to her. She was beatified in the 17th century but did not become a saint until 1900.

It was the Augustinians who settled in a convent in the Ribera neighbourhood that brought the devotion to St Rita to Barcelona. Later they moved to the Sant Agustí Church in the Raval, which is where the saint's remains are housed. The move was precipitated by the construction of the military citadel, Ciutadella, after 1714. And it explains why the feast day has been celebrated in the Raval district since the second half of the 18th century. 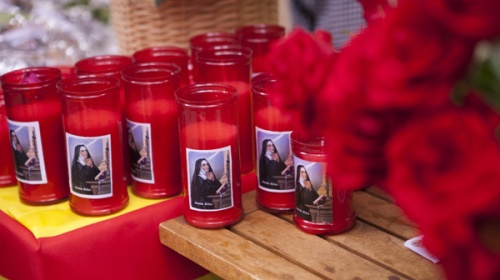 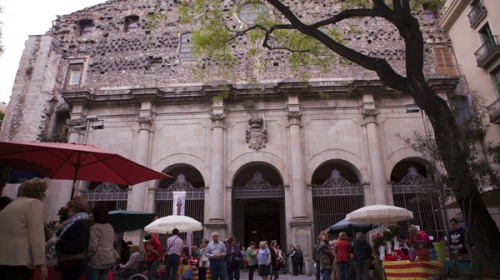 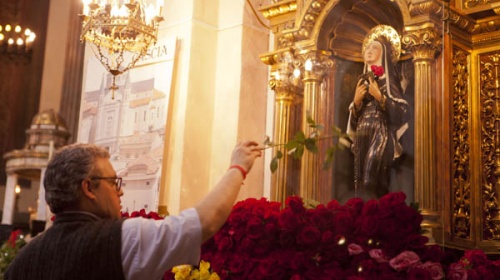 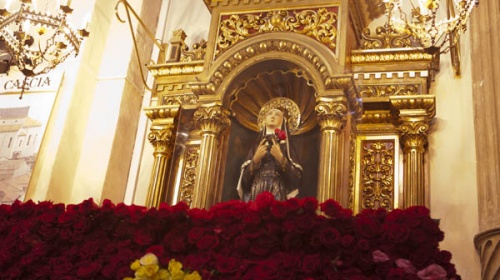 Popular tradition speaks of three roses: one is offered to the saint, another is given as a present and the third is kept in a box with a coin until 22nd May, when the roses are burned and the money is given to the poor.

Veneration of the saint. From 7 am, Plaça de Sant Agustí begins to fill with people, especially women, who queue up to worship St Rita, make "impossible" requests and thank her for the favours she has granted them during the year. When it is their turn, they kiss the saint's remains, offer her red roses and wish for all kinds of things, although mainly related to health.

Rose blessing. While offering roses to the image of St Rita is very important, not all of them are left at her feet. Some are kept back to be blessed by the priest, which he does every half hour. The midday blessing, after mass, attracts thousands of the faithful both inside the church and in the square. The most devout worshipers believe that if the holy water wets their roses, their prayers will be answered.

According to the legend, from a very early age Rita wanted to be a nun but she was forced to marry and had two sons. Eighteen years later, after her sons and husband had died, she entered an Augustinian convent in Cascia (Italy). Initially Rita was not very well received on account of her having been married.

When she herself was about to die, she told the sisters that her greatest wish was to smell roses. It was the middle of winter but they went down to the garden and found all the rose bushes in bloom. That is why Rita is revered as the patron saint of impossible things and rose hawkers, and why roses play such a prominent part in the homage to her.