Around the Feast of St Anthony

The main event of the Festa dels Tres Tombs de Barcelona is a musical parade of animals – horses, donkeys and mules – in a cavalcade and pulling coaches around the city centre. Halfway round they pause in front of the Escola Pia de Sant Antoni, where the animals are blessed. It is a festival in the form of a procession, with a start and a finish, but it does not include the traditional tres tombs, the three tours of a holy site.

The Tres Tombs festival is held in honour of Sant Antoni Abat, or St Anthony the Abbot, the patron saint of animals, especially hoofed ones. Legend has it that if he saw one that was injured, he treated it. He did this with a piglet he found in Barcelona and, as a sign of gratitude, the piglet accompanied him ever after. That's why images of him often show the piglet at his side.

St Anthony, who lived between the 3rd and 4th centuries, died on 17th January. So this day that was chosen to pay homage to him.

The Barcelona Tres Tombs cavalcade has been held from at least 1826, around the Portal de Sant Antoni Abat, which, over the course of time, became the neighbourhood now known as Sant Antoni.

For the first hundred years the cavalcade and animal blessing seemed perfectly natural events because horses and donkeys were a normal part of everyday life in the city. When they were no longer a common sight in Barcelona, the celebration was maintained as a tribute to the hoofed animals that, over the course of history, have been an economic and social driving force. 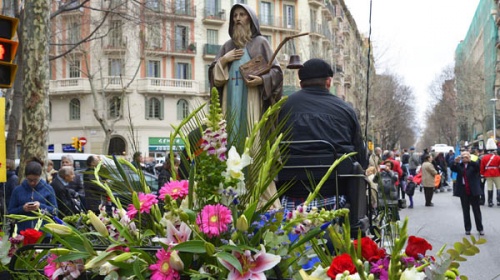 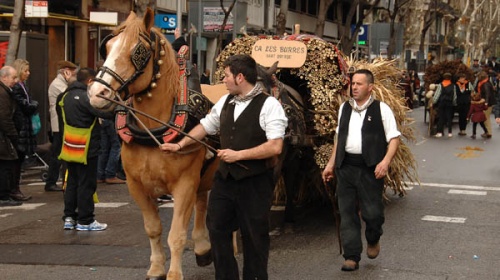 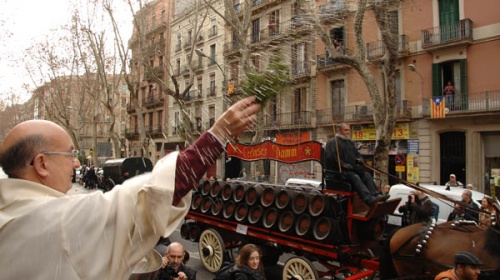 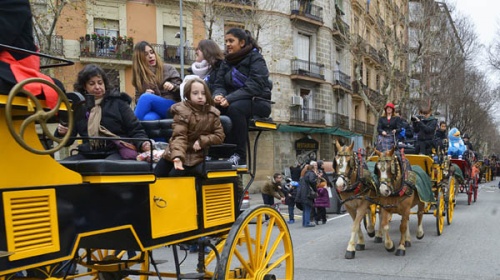 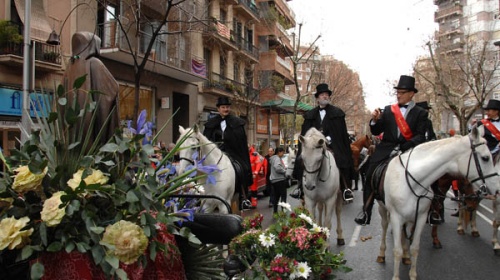 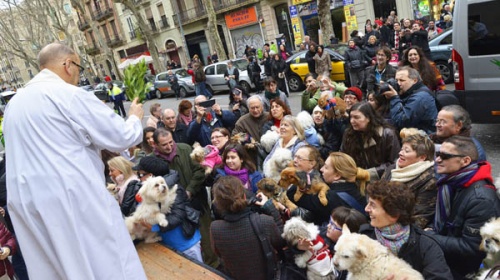 The Porca de Sant Antoni is a fire beast which is one the local festival figures. It represents the sow that appears in the legend of Sant Antoni and is also linked to the rifa del porc , the pork raffle drawn in the neighbourhood on the saint's feast day. It was created in 1995 and appears several times during Sant Antoni's annual festa major.

The cavalcade. The horse-drawn carriages that take part in the cavalcade assemble on Montjuïc and then start the technical parade to Avinguda de Mistral, where the standards' presentation ceremony takes place. The musical parade starts at 10.30 and winds its way round the city-centre streets towards Plaça de Sant Jaume, where the city's elected representatives receive the procession.

It includes 17 smartly dressed horsemen. The three at the head are the Sant Antoni Abat standard bearer and the two rope holders. The 17 horsemen are preceded by the lancers and band of the Guàrdia Urbana's mounted police. They are followed by a float carrying a statue of St Anthony and others of the associations and administrations responsible for organising the day. The participation of riders and carriages is open to any association as well as the general public. Traditionally the participants throw sweets to the public.

Animal blessing. The cavalcade always goes along the Ronda de Sant Pau so the animals can be blessed in front of the Escola Pia de Sant Antoni.

The pork raffle. In 2013 the festival revived the rifa del porc, a draw for hampers with products donated by the neighbourhood's pork butchers who, in the preceding weeks hand out numbered tickets to their customers. The raffle tradition goes back two hundred years, to when funds were being raised for the Hospital de Sant Llàtzer, really close to this neighbourhood.

There is an unusual start to the Tres Tombs festival because the organisers now release 150 Sant Antoni pigeons. This is a very recent initiative that Barcelona's residents have taken up. They represent the 150 wishes the city wants the saint to fulfil and it is supported by the homing pigeon association, the Societat de Coloms Missatgers de Catalunya.