The Bastoners del Raval made their debut in 1996, sponsored by the Bastoners de Gràcia and the Gegants del Raval. The initiative came from the traditional dancers of the Esbart Dansaire de Santa Eulàlia, also in the Raval, and together they now make up the two sections: dansaires and bastoners.

The Bastoners del Raval's colours are green and purple, while the bell pads on their legs are red. This choice was inspired by residents of the neighbourhood when the group was set up: lilac to symbolise the feminist movement and the fact that most of the first members were girls; green to demand more green spaces; and red to show how much fun the new group was. Their costume originally included a long mocador worn crosswise like a sash, before it was replaced by a real sash with their badge on their chest. They also added an overskirt to match the sash, green for the dancers on the right side (dretans) and purple for the left side (esquerrans).

Gradually Raval's stick dancers have created their own repertoire, often adapted to dance techniques within the group's capabilities, with choreographies designed for the number of active dancers at any given time.

Since 2005, they have organised a diada bastonera during the Mare de Déu del Carme festivities, Raval's main festival. For this, groups of stick dancers come from all over Catalonia. At the same time, the Raval group take part in the diades organised by other colles and any other events they are invited to, in the city and further afield. 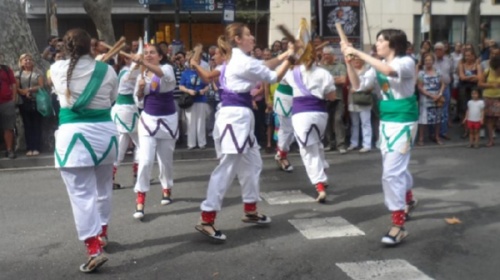 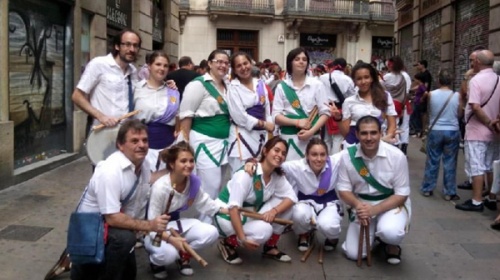