The Ballets de Catalunya dance group was set up in 1953 as a cultural association and, since then, it has attempted to revive and spread traditional and popular dances from all the Catalan-speaking lands. Right at the start they established a Cos de Bastoners, which performs on its own as well as taking part in the shows put on by the group.

The stick dancers wear a red headband, a large scarf draped across their back and tied across their chest, and an overskirt that are either red or blue with yellow edging, plus red bell pads round their ankles.

The bastoners are only one of the Ballets de Catalunya's six sections. The other five are the children's section, the youth section, the cos de dansa, the Ball de Plaça and the Antics Dansaires.

The cos de dansa has a large repertoire of dances that it performs on stage and in city streets and squares. The children's and youth sections focus on training and teaching their members the traditional heritage. The former is for younger children, aged 6-10, and the latter for older children, aged 11-14. Any parents interested in learning the dances can join the Balls de Plaça. Finally there is the Antics Dansaires' section for older dancers. This was set up in 2003 for the group's 50th anniversary. When the dancers perform they are accompanied by a music group called De Soca-rel. It was formed in 1990 as part of the Ballets de Catalunya but they do their own concerts as well.

Every year the group hold three festive events on Carrer Enric Granados, next to their centre: the castanyada, or chestnut fest, for All Saints, the one on Carnival Saturday and the Spring Festival, on the first or second Saturday in June. 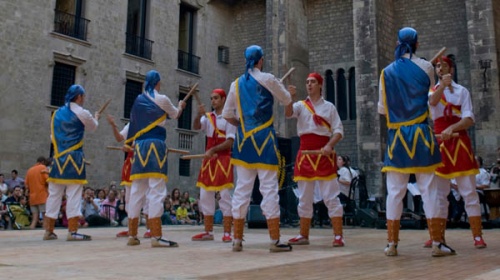