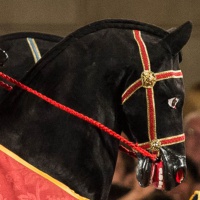 Built in 1932 by
Taller Malatesta

The Cavallets Cotoners, literally translating as the "cotton merchants' hobby horses", are eight figures that represent the fight between the Turks and the Christians. They form part of the giants' retinue, the Seguici Popular de Barcelona and the city's historical animal and mythological figures, the Bestiari Històric. Today's figures belong to the parade dance group, the Esbart Català de Dansaires.

However, their origins date back to 1424, which is when the first documentary evidence of them appeared. They belonged to the Barcelona Council, which soon handed them over to the cotton merchants' guild, the gremi de cotoners, which explains their current name. We have evidence that they took part in many festive occasions in the centuries that followed, for example, the city's Corpus Christi procession and institutional celebrations.

They reappeared in 1933 thanks to the Esbart Català de Dansaires, who decided to reclaim them and commissioned the Taller Malatesta to do it. To mark them out from other figures, the craftsmen of that workshop designed each one with different expressions, looks and positions. As part of a project to revive Barcelona's festival imagery, they were restored and joined the Seguici Popular in 1994. Like the other figures in the retinue, they appear in the most important city celebrations: Santa Eulàlia, Corpus Christi and La Mercè.

The retinue has two pieces of music. One is strictly for formal occasions and was composed by Jordi Fàbregas. The other is more informal and used for street parades and processions. It was arranged by Joan Gómez, who based it on a simple dance for couples and a folk dance called a corranda. Besides those, the hobby horses have their own dance, named after them: the "Ball dels Cavallets Cotoners".

The Cavallets Cotoners can be visited throughout the year at the Casa dels Entremesos, where they are displayed along with a good many other Ciutat Vella figures.