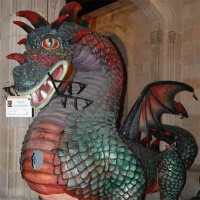 Baró, the Nou Barris dragon, is a pyrotechnic figure linked to the neighbourhood colla de diables, the festival devils group set up in 1981 to spread Catalan fire and pyrotechnic traditions, in an area of the city where a large part of the population came from outside Catalonia.

This beastly figure, which has 30 points for emitting fire, is pushed by two people who move it thanks to the wheels attached to its frame.

Baró was created in 1986, on the initiative of the  Grup de Foc de Nou Barris, which was slowly acquiring new pieces to liven up the devils' firework displays. They commissioned the artist Joan Miró Oro to do the job and Baró was presented to the neighbourhood the same year.

The dragon that takes part in the street parades and pyrotechnical displays of the Nou Barris group today is a replica of the original, made in 2003 to preserve the old one.

Baró has an important role in the Nou Barris festive calendar, taking part in the better-known popular culture events in the annual festival as well as the Nou Barris Fire Festival (Trinitàrium), at the end of the Trinitat Nova festivities. You can also see Baró each year in the La Mercè correfoc, or fire run, as well as other pyrotechnic displays around the city he is invited to.