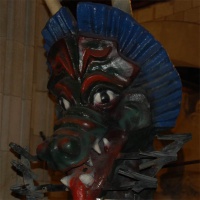 Capallà, a dragon associated with Horta and El Carmel, is a wild-looking fire beast designed to be carried by two people. It has various points in its mouth and on its tail and wings for letting off fireworks.

The idea to build it occurred in 1988. El Carmel already had its own colla de diables , so they thought it would be good to organises a colla de drac. Using some drawings by Dolors Castilla, the Cardona image maker Toni Mujal gave life to the new dragon, which was ready in 1990.

Capallà appeared for the first time at Horta-Guinardó's autumn festival that year but still had no name. In fact, the dragon got its name as a result of that first outing. Its carriers directed it by saying "cap aquí" and "cap allà", "this way", "that way", so they decided to christen it Capallà.

Later, Mujal made lighter copy so it was better to carry. He chose an unusual combination of fibre glass and Kevlar, a synthetic fibre that is highly resistant to fire and blows.

Over the years, Capallà has become one of the main figures in the district's correfocs and firework displays. You can often see it, together with the diables and tabalers, at different gatherings and celebrations in the city, where it is always carried by the Drac d’Horta – el Carmel group.