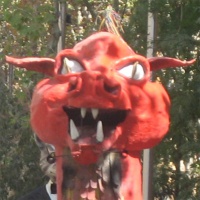 Estarrufat, the Poblenou dragon, is a festival figure that stands out from the rest for being red. It belongs to the Colla del Drac del Poblenou and takes part in street parades and fire shows, accompanied by the group's devils and drummers.

Estarrufat was born in 1985 and was the colla's own idea. They wanted a beast to accompany the diables (devils) in the pyrotechnic displays. Manel Ollé was the artist commissioned to build the dragon and it was presented during the neighbourhood's May festivities, which it has never missed since. It can also be seen during the main annual local festival, in September, as well as at various festive events, street parades and correfocs (fire runs) around the city.

One of the stories about it is that it was built in the Ollé family warehouse and, when it was finished and ready to be taken out, they realised it was too big to fit through the door. So, to get it out, they had to cut it into pieces and, in the process, turn it into a dragon that could be taken apart, with a separate head, tail, body and skirts that had to be fitted together with screws and stays. Eventually, though, in 1993, they restored it and put all the parts back together for good.

Estarrufat has its own music, the "Estarrufada", a melody for two shawms that Susanna Medialdea composed expressly for it in 1991.

When it is not out and about, you can visit the dragon at the Centre d’Imatgeria Festiva Can Saladrigas, where it is always on display with the other Poblenou figures.