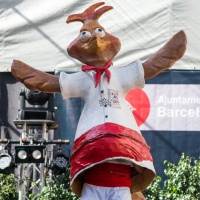 Built in 2007 by
students of the festival animals introductory course

Nikulau l’Au, or Nikulau the Bird, aka Niku, is a popular festival figure that represents a falconer's falcon. He belongs to the Falcons de Barcelona, which explains why he wears a white shirt and a red girdle.

Niku's origins go back to 2002, when the Barcelona Falcons were set up and they chose a falcon to represent them and act as their virtual spokesperson, responsible for calling the members together for their performances.

The 3D Nicolau, made from fibreglass and papier-mâché, appeared in 2007. He came out of a practical introductory course on festival animals, organised by the Rosa Sensat association and taught by the Agrupació de Bestiari Festiu i Popular de Catalunya.

Niku made his first public appearance during the La Mercè festivities in 2007 and, since then, he has accompanied the Falcons in all their performances, always carried by the youngest members of the group, the enxanetes. If he is not out with the Falcons, he can be seen on display at the Casa dels Entremesos.