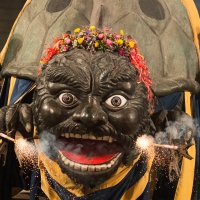 Built in 1993 by
Xavier Jansana

The Tarasca of Barcelona, formerly called Cuca Fera (Carnival Dragon), is a beast that has a cat's head with human features and the body of a tortoise. It has a double role because it breathes fire in the correfoc fire runs and pyrotechnic shows, while it showers water and sweets in street parades and at official events. The Tarasca forms part of the giants' retinue, the Seguici Popular de Barcelona, as well as the city's group of historical beasts, and is always carried around by the Barceloneta colla.

The origin of the Tarasque figure must be sought in a legend of the Provence village of Tarascon, according to which there was a creature that lived between the mist and the muddy waters of the marshes and terrified the people of the village because it devoured their young maidens. Based on that story, it became a very popular character and spread all over Occitania and part of the Catalan-Aragonese kingdom. In some places it has survived to this day as a festive character.

The information we have about the Tarasca as part of Barcelona's festive imagery is not clear, often because it has been confused with other beasts. In fact, Spanish writers, unaware of Barcelona's festival heritage, tended to call any of the beasts that were unfamiliar to them tarasca.

Anyway, in the 1990s, taking advantage of the project to recover Ciutat Vella's festive imagery and the impetus that gave, it was decided to create Tarasca in the image of the Tarasque figure in Tarascon, with which it shares a considerable resemblance. The Associació de Geganters, Grallers i Bestiari de la Barceloneta took charge and commissioned Xavier Jansana to make it. It first appeared in 1993, immediately becoming part of the Seguici Popular de Barcelona, and a dance was composed for it: the "Ball de la Tarasca".

Throughout the year it can be visited at the Casa dels Entremesos, where it is displayed with a lot of Ciutat Vella's other festival imagery.