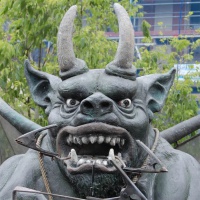 Built in 1995 by
Xavier Jansana

Tolc is a fire beast that belongs to the cultural section of the Orfeó Martinenc, along with the neighbourhood's giants and other festive figures.  It represents a winged gargoyle that shoots sparks and flames from 12 points on its body, including its back teeth, its hands and its wings.

The fibreglass figure is supported by an iron structure. It moves around on four wheels, pushed by a couple of people who keep changing because it is really heavy, weighing approximately 200 kilos.

Tolc was created in 1995 as a replacement for the group's old dragon, a cloth figure that had been around since the early 1980s and, over the years, had been damaged by fire. The new beast was commissioned from the image-maker Xavier Jansana and they called it Tolc – Clot spelt backwards – as this was the winning option in a public competition in that neighbourhood.

Tolc is always carried by members of the Orfeó Martinenc colla and is the star of the fire show at the annual neighbourhood festival, held in honour of Sant Martí (St Martin). It can be seen at other city events and celebrations too, accompanied by diables (devils) dancing to the drumbeat of the Tabalers del Clot.