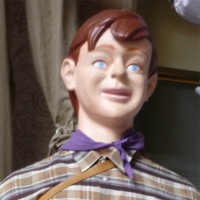 Built in 2009 by
Francesc Cisa

Míliu is linked to the Sagrada Família neighbourhood. He represents a fictional character created in the 1930s by the journalist and Ràdio Barcelona presenter Josep Torres Vilalta, aka Toreski.

Míliu was a boy invented principally to raise money for charity. The presenter conversed with him and both of them led numerous campaigns. In fact, Míliu became such a popular character that a sculpture was made of him, which now stands in Plaça de la Sagrada Família.

The residents' association giants group, the Colla Gegantera i Grallera de l’Associació de Veïns i Veïnes de la Sagrada Família, was the inspiration behind the move to make the new figure, because they wanted a small giant the young people in the neighbourhood could carry. They also wanted to bring Míliu back to carry on the charity work he had started 70 years before.

So the new gegantó was made in 2009 by the festive imagery craftsman Francesc Cisa. He appeared in public for the first time that year, at the neighbourhood giants' gathering, and, since then, he has taken part in numerous charity events organised by the residents' association. He can also frequently be seen at city parades and celebrations.