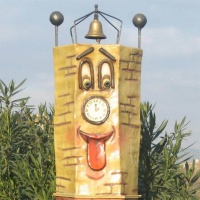 Pepitu Campanar is a small giant in the Colla Gegantera de Gràcia. He represents the old town's bell tower and has an unusual feature: while he is moving around, the carrier can make the bell inside ring.

Pepitu started life in 1984 as a "big head", a capgròs, to advertise the magazine Carrer Gran de Gràcia. The Can Forés workshop built him based on drawings by Miquel Giménez. A few years later the magazine disappeared and Pepitu was given to the neighbourhood giants' group, who presented him in 1998 in the form of a dwarf, or nan.

After further alterations, he reappeared again on 11 December 2004 as we know him today, the gegantó Pepitu Campanar. The task of converting him was given to the artist Dolors Sans, from Vilafranca del Penedès.

Pepitu Campanar seldom goes out but when he does he is accompanied by the other figures from the Gràcia colla. One event he does turn out for each year is the annual festival on 15 August, and another is  the biennial giants' gathering, held in the first fortnight of May in odd years.