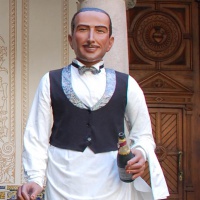 Quimet is a small Poble-sec giant, who looks like one of the Paral·lel theatre and café waiters, with his white shirt, black waistcoat and apron. In one hand he has a bottle of cava, which he is seemingly about to pour into the glass in the other hand.

This gegantó belongs to the Colla de Geganters i Grallers del Poble-sec and a parade group consisting of the new giants, Armand from Montjuïc and Rosa from Paral·lel, as well as the Three Chimney Stacks. He was made in 2002 by Jordi Grau, at the El Drac Petit workshop, the same artist that had built the big giants the year before, and they named him after the popular Quimet i Quimet bar on Carrer del Poeta Cabanyes.

Quimet was presented to the public that year at the neighbourhood annual festival, which is held around St James' Day, 25 July, and since then he has never missed one, thanks to the young members of the group that always carry him. He can also be seen at parades and giants' gatherings held in other Barcelona neighbourhoods, usually accompanied by the other figures in the comparsa.