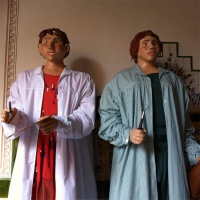 Built in 1992 by
Xerrac workshop children

Built in 1992 by
Xerrac workshop children

Darsius and Gebàs are two Guinardó gegantons, two twins who study at the Xerrac expression and plastic arts workshop. He is a painter and she makes pottery. Their clothes and accessories clearly identify them with their trades. Darsius wears a painter's coat and has a palette and a brush in his hands, while Gebàs, wearing a shirt to keep her dress clean, has a jug that looks like it has just been made in one hand and a tool for polishing it in the other.

The idea of building these two figures came from the boys and girls at the Xerrac workshop at the start of the 1990s. They wanted some gegantons they could carry to accompany the bigger Guinardó gegants at the parades and giants' gatherings.

The pupils themselves took charge of making them, out of papier-mâché and wood, because they wanted them to reflect the two techniques they were learning at the workshop: ceramics and painting. They were finished in 1992, when the Colla de Gegantons del Xerrac was set up. In May that year they took Darsius and Gebàs to dance at the neighbourhood annual festival, an event they have never missed since then.

And since 2000 they have had their own dance: a piece of music by Teresa Cuxart, choreographed by Montserrat Cuxart.