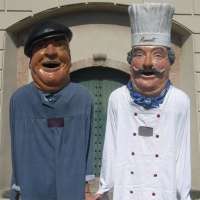 Ramonet, Ganxut and Torre del Rellotge are gegantons in the Barceloneta colla. The first two are symbolic of typical trades in the neighbourhood: Ramonet is a chef and Ganxut a port stevedore. Torre del Rellotge, on the other hand, is a strange figure that does not represent a person but a building: a clock tower on the fishermen's wharf, Moll de Pescadors, which is regarded as a symbol of this seafront neighbourhood.

Like the two gegants Pep Barceló and Maria la Néta, the three smaller giants were born in 1991, thanks to the efforts of the Associació de Geganters, Grallers i Bestiari de la Barceloneta. The association were looking for elements that would identify the neighbourhood in order to create their own figures. They gave the job of making them to the image-maker Xavier Jansana, and he produced the gegants, the capgrossos (big heads)Ganxut and Ramonet and the gegantó Torre del Rellotge that very same year. A couple of years later, in 1993, the two capgrossos were turned into gegantons de motxilla (backpack giants).

All the Barceloneta giants, big and small, were unveiled in 1991, at the festival in honour of Sant Miquel (St Michael), the patron saint of the neighbourhood, and they have never missed one since. They can often be seen at other city parades and celebrations too. When they are not out and about, you can see them displayed at the Casa dels Entremesos, with other Ciutat Vella festival figures.