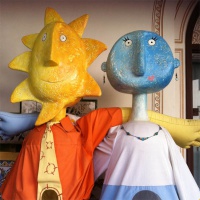 Built in 1999 by
Àngels Jutglar

Built in 1999 by
Àngels Jutglar

Torradet and Gresca are two figures in the Gràcia comparsa that represent different moments in the neighbourhood annual festival. Torradet is a sun, symbolising the light and heat of daytime activities, while Gresca is a moon and makes us think of festival activities at night. Their names were chosen in a vote held among Gràcia schoolchildren.

The idea of making these two gegantons came from the Federació Festa Major de Gràcia, the festival organisers. They were looking for some figures that could parade round the decorated streets during the annual festival. So, before having them made, the federation studied very carefully how tall they would have to be to get round everywhere. They also wanted them to be light enough to be carried by the younger geganters.

Torradet and Gresca are the work of the artist Àngels Jutglar and she made them from a design by Mercè Galí. They were finished in 1999, the year they first appeared at the annual festival, in a floral offering to Sant Roc.

Besides playing an important role in the Gràcia festival programme, they are hosts of the neighbourhood giants' gathering, along with the other members of their colla. It takes place every odd year, during the first fortnight in May. They also go out now and again to take part in city parades and celebrations, and others round the country, when they are always carried by the Colla Gegantera de Gràcia.