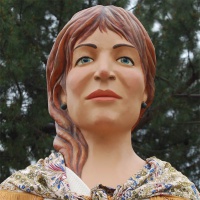 The Sagrera giant, better known as Sagrerina, represents rural life: a young peasant woman going in search of water with a ceramic jug in her hand.

Her story begins in 2003, with the formation of the Colla Gegantera de la Sagrera to make some giants for the Sagrera neighbourhood. The basic idea was to create a figure that represented La Sagrera, that kept the neighbourhood's popular culture alive and helped to achieve a strong identity that would stand the test of time.

The female giant, made by the Ventura & Hosta workshop, was presented in November the same year. At the time they planned to have a partner ready for her the following year, a young man she would fall in love with going to fetch water from the fountain, but he never materialised.

Today the Colla Gegantera de la Sagrera not only have Sagrerina, they also have two "big heads", Rocabruna and Rata the rat, and all three are eagerly awaited at the neighbourhood annual festival, in the second fortnight of November. Sagrerina is a regular participant in the giants' parades and gatherings in Barcelona and never misses the La Mercè or Santa Eulàlia festivals.