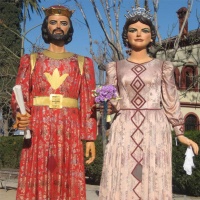 Built in 1981 by
Domènec Umbert

Built in 1981 by
Domènec Umbert

Tano and Estiveta are a couple of giants associated with the Catholic educational youth camps, Colònies Jordi Turull. A medieval king and queen created to liven up the activities organised by the Escola Pia Fathers at their youth camp house in the Pineta Valley, Huesca.

They are the work of the master image-maker Domènec Umbert, who made them in 1981. They were the first built by this master giant-maker after a period of absence. They made their debut the same year, first Tano and then Estiveta, a few months later.

The Sant Josep de Calassanç giant-carriers carried them for nearly twenty years and initially they were accompanied by two "big head" figures resembling smurfs. They all used to take part in the Escola Pia festivals around Catalonia, as well as the El Clot - Camp del l’Arpa and Pineta Valley festivals.

After a few years of relative inactivity they reappeared in 2007 to take part in Barcelona street parades and giants' gatherings. The Associació Gegantera dels Gegants de Sant Jaume took them out while they were waiting for their own giants to be built.

In 2010 they were handed over to the Colla de Geganters i Grallers de Sant Antoni, who now carry them round on the streets. Since then they have taken part in their neighbourhood festival and the two big city festivals – La Mercè and Santa Eulàlia – often accompanied by their children, the smaller giants Cisco and Pineta. And when they are not out and about, you can see them on display in the entrance to the Escola Pia in Sant Antoni, along with the other neighbourhood giants.