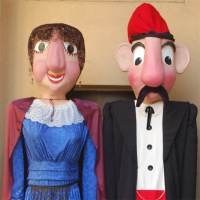 Estevet and Tuies, or Toietes, are two giants linked with the Sant Medir parish in the La Bordeta neighbourhood. Physically they are very different to the classical giant model because their faces and shape are more like those of children than of the adults they represent.

The original figures, about 4 metres tall, saw the light of day in 1979, thanks to the joint efforts of Titelles Babi and a group of people in the parish who wanted some giants to take out on festive occasions.

Five years later, in 1984, thanks to the same makers, a son appeared, a smaller giant called Medir, Pere Massegod or Medinet (his name has changed over the years, depending on the group in charge of him).

The family had a short life to start with. After a few years of dances and outings, the parish group was wound up and they were locked away until 1989, when El Drac d’Or in Hospitalet de Llobregat dug them out and dusted them down so they could go out again. However, that wasn't very often because they were very heavy and uncomfortable to carry.

Then, in 2009, a new group got together in the parish who were interested in them and they approached the Drac d’Or, who had been taking care of them until then. Seeing the state they were in though, and how difficult it would be to take them out and make them dance, the new group ordered some replicas from the artist Pere Estadella. With all that, the heads of the original figures are now kept at the Sants History Archives.

The new Sant Medir Giants debuted in September 2009 and since then it has been usual to see them dance with the Sants giant-carriers in the parish and neighbourhood festivals, as well as at other parades and giants' gatherings.