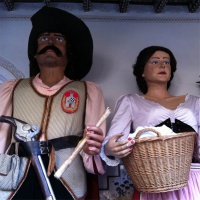 Perot Rocaguinarda and the Bugadera d'Horta are the Horta-Guinardó giants, created with the idea of representing all the neighbourhoods in that district.

Perot Rocaguinarda is a seventeenth-century highwayman who, according to legend, robbed the rich and shared his booty among the poor. He carried out most of his robberies in the county of Osona but returned to Barcelona to spend the night at the Mas Guinardó farmhouse or nearby. Perot's clothes – a wide-brimmed hat, cloak and waistcoat – are those of a smartly dressed highwayman and in his hand he carries a scroll with the pardon he was granted at the end of his life.

His partner represents one of the numerous washerwomen (bugaderes) from the old town of Horta who went down to Barcelona to fetch the clothes of the wealthy and brought them back to wash them in the neighbourhood sinks, some of which are still preserved today. Today's giant washerwoman is dressed like the working women of that time, with an old-fashioned blouse, a bodice and an apron, and she is carrying a wash basket full of clean clothes.

The sculptor Xavier Jansana was given the job of making the two giants and they were finished in time to make their public debut at the Horta annual festival in 1986.

The Colla de Geganters del Guinardó is, and always has been, responsible for taking them out and making them dance at local parades and giants' gatherings, as well as at special festivals in the city and around Catalonia. Their main outings, though, are the district neighbourhood annual festivals, where they are the hosts.