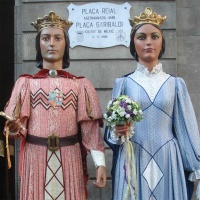 Bernat and Maria, better known as the Poblenou Giants, are classical figures representing a medieval king and queen.

The idea to make them came from the three parishes in the neighbourhood. They wanted some figures to take part in the Corpus Christi procession. So, in 1953, they bought some giants made by the image-maker Domènec Umbert at the Barcelona shop El Ingenio. They took part in the procession that year and in subsequent years until it stopped in 1965, and then they were stored away in the Santa Maria del Taulat bell tower.

In 1980 they were taken out and restored by Josep M. Carreras and in 1981 they reappeared at the Poblenou annual festival, the year the group that looks after them, the Colla de Gegants del Poblenou, was set up.

Following their reappearance, in 1982 the two giants were given the names Maria and Bernat to recall two of the parishes that bought them: Santa Maria del Taulat and Sant Bernat Calvó. Since then the couple have taken part in parades and giants' gatherings all round Catalonia and even beyond.

In 1997 they were restored again and on that occasion the job was given to Jordi Grau, at the El Drac Petit workshop in Terrassa.

The Poblenou Giants appear at their own gathering, held during the annual festival in September, as well as the May festivities, when they can be seen leading the parades and performing their dance.