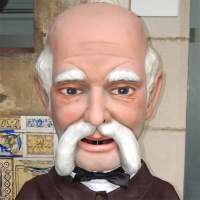 The Ildefons Cerdà capgròs belongs to the Coordinadora de Geganters de Barcelona and is linked to the Eixample district. This big-head figure represents the illustrious civil engineer responsible for Barcelona's urban development in the 19th century, known as the Cerdà Plan.

The capgròs was built by the Cardona image-maker Toni Mujal in 2009 for Cerdà Year and he debuted at that year's La Mercè parade. Since then he has been part of the Coordinadora de Geganters de Barcelona parade group, taking part in gatherings and parades around the city, often accompanied by another big-head figure representing Narcís Monturiol.

The Cerdà figure is permanently displayed at the Eixample district offices, along with the Gaudiesque giant figures from the Pedrera and Crespinella de Barcelona.