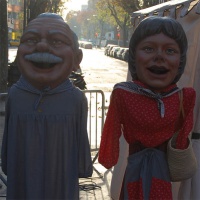 Jaume and Mercè are the capgrossos ("big heads") of the Barcelona neighbourhood Poblenou. He is a cooper, a profession that was very well known in Catalonia at the turn of the twentieth century, especially in this neighbourhood, where warehouses for wine and spirits were a very important feature. She is a woman dressed in working clothes and carrying a shopping basket, who reminds you of the women workers who have always given life to the neighbourhood.

They were given to the Colla del Drac anonymously in 2007 and are one of the many pairs of capgrossos that the Agrupació Mútua gave to Catalonia's county capitals to mark their anniversary. They were made by the Sarandaca workshop in 2001. The Colla del Drac's members were responsible for adapting them to the make-up of the neighbourhood and Mar Grañena took care of their clothes.

Having gained these new figures, the colla decided to find a local festive occasion they could play a leading role in and, since then, they have been livening up the May festival fair. Along with other figures in their group they also take part in the parades and giants' gatherings in Poblenou and the city, where they are always carried by the youngest members of the group. When they are not out on the streets you can see them at the Centre d’Imatgeria Festiva Can Saladrigas, where they are always on display with the other neighbourhood figures.