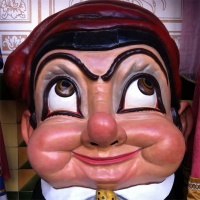 Built in 1986 by
Domènec Umbert

Cu-cut is a dwarf that belongs to the Colla Gegantera de la Plaça Nova, in the Barri Gòtic. He represents a popular character from a satirical magazine of the same name, which was published in Barcelona at the start of the 20th century. He has a naughty expression on his face and wears a traditional Catalan barretina hat, a white shirt, a black jacket and a yellow bow tie with blue spots.

Originally he was a "big head", a capgròs built at the Olot workshop Las Artes Religiosas in 1907, a year after the giants Roc and Eulàlia first appeared. Following his own presentation the same year, during the Sant Roc festivities in Plaça Nova, he went out every year with the other figures in the parade comparsa until 1924. Then he was shut up in a warehouse, where he deteriorated and ultimately disappeared.

In 1986 the Associació de Festes de la Plaça Nova decided to bring Cu-cut the capgròs back, to accompany the gegants. They commissioned the master image-maker Domènec Umbert to create a new version, which had softer, more childlike features and turned the "big head" into a dwarf carried with a trestle like the giants.

Cu-cut the nan made his public debut on 15 August 1986, during the Sant Roc festivities. These days a lighter replica is taken out, carried exclusively by the girls in the colla, called Cucuteres.

Cu-cut has his own dance, with a small piece from The Magic Flute by W. A. Mozart adapted for the Pessigolla shawm players, and a choreography designed by the giant-carriers' group.