The Diables de Gràcia introduced themselves to the public at the neighbourhood's annual festival, the festa major, in 1981. It was the first colla in the old town and one of the oldest devils' groups in the city, along with the Diables del Clot and the Diables de Sants. The Gràcia group was born thanks to the efforts of Jordi Cubillos, a historical figure among the popular culture community in Sitges. In fact, the origins of the Gràcia diables were closely tied to those of Garraf, whose clothing they copied.

When some of its members left and set up the Diabòlica de Gràcia in 1982, they adopted their definitive name, Colla Vella de Diables de Gràcia. Currently they are based at the Centre de Cultura Popular La Violeta de Gràcia.

One very important section of the colla is the tabalers, the drummers who liven up their performances with the rhythmic tunes that form part of the fire tradition. They also have around ten tunes of their own: "Copes", "The Night", "L'Honorable", "The Day", "Dialogue", "Gauss", "Puti", "Màster", "Euler" and "Tribal". They have composed a few more as well with the tabalers of the Malèfica del Coll, the tabalers and grallers (shawm players) of the Castellers de la Vila de Gràcia, and the grallers of the Gegants de Gràcia.

In 2007 the Colla Vella created a children's section called the nightmares, the Malsons de la Vella.

Mostly they perform in Vila de Gràcia, where they take part in the cercavila street parades, the annual festa major, the Cercatasques drum parade, the Three Kings procession and the Associations Fair, among other events. But they have also performed in other city neighbourhoods and places like Reus, Valls, Castelldefels and Vila-seca where, in 2003, they took part in the first national gathering of devils' groups, the Trobada de Colles de Diables dels Països Catalans. The same year they unveiled the Akelarre (Basque for Witches' Sabbath), a social get-together they round off the season with every year.

Vella de Gràcia also took their fire show to Marseilles in 1994, when Vila de Gràcia twinned with two of the French city's districts, and to sa Pobla, when Gràcia twinned with that Mallorca town. Following that twinning arrangement, Gràcia started to organise the Foguerons de Sant Antoni, a bonfire festival in honour of St Anthony, on the last weekend of January. 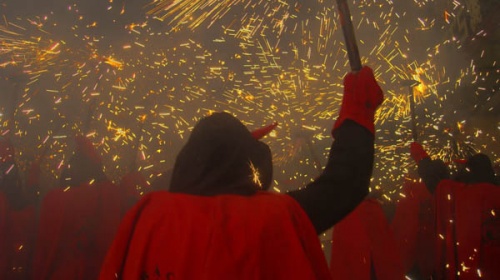 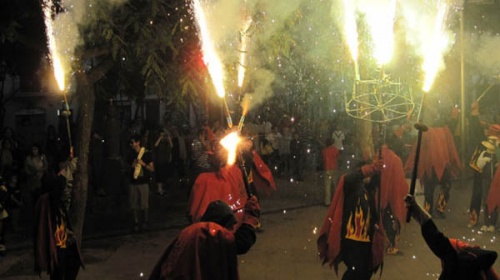