The Diables de Port were born in 1996, thanks to the drive of a group of people who had been involved in similar associations. Based at the Centre Cultural del Port, they were officially christened three years later, in 1999. The Diables de Sants acted as godparents at the baptism and two dragons, Horta-Carmel's Drac Capellà and Hospitalet de Llobregat's Skamot Diabòlic were witnesses.

A children's colla de diables was also set up in 1999 called the sparks, the Espurnes del Port, along with the tabalers. This percussion group accompanies the children's and the adults' groups, as well as performing on their own.

The Diables de Port play an active role in the festive life of the Zona Franca but they have also appeared publicly all over the city, as well as around Catalonia, in Lleida and Girona, for example, and in the Balearics. They even went to Sarajevo once, for an event to commemorate the 10th anniversary of its twinning agreement with Barcelona and the Catalan capital's help in rebuilding the city after the war in Bosnia.

Their association is also responsible for some giants, the Gegants de la Marina. First they brought back Quimeta and Magí, a couple of giants that had not appeared at the neighbourhood festival for many years. Then they added those of Paco Candel, some capgrossos and Campisdrak, the small giant of the children's colla. When these giant figures appear, they are accompanied by the music of their own grallers, or shawm players. 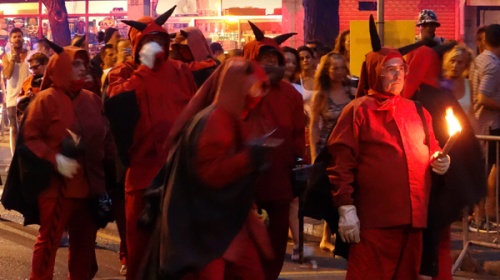