The Diables del Barri Gòtic were set up in 1984, when they were known as the Diables de Sant Roc. At that time they followed the classic devil-dance model, inspired by the old diablots in Barcelona's Corpus Christi procession. But as time went by their shows evolved towards the correfoc fire runs and pyrotechnic displays.

In some of their performances they are joined by the neighbourhood's fire beasts, such as the Víbria, a mythological female dragon, and the Arpella, a harrier dragon, while they have also performed with the "fire jugglers", Malabars de Foc del Barri Gòtic.

Percudium, a group of tabalers, provide the drumbeat to accompany the Diables del Barri Gòtic. They have their own, wide range of tunes and are often asked to play with other collas de diables. When they perform the Diables del Barri Gòtic wear clothing of medieval inspiration, mainly black and purple. They also wear large, white, horizontal horns. And they are armed with five-pronged forks, plus a revolving sceptre that can launch up to a hundred bangers.

They usually perform during the neighbourhood Sant Roc and city Santa Eulàlia festivities. They play an active part in the La Mercè festival too, since this has involved a joint correfoc. They have visited many places in Catalonia, the Balearics, Valencia and North Catalonia, as well as the Occitan towns of Montsegur, Foix and Avelhanet. 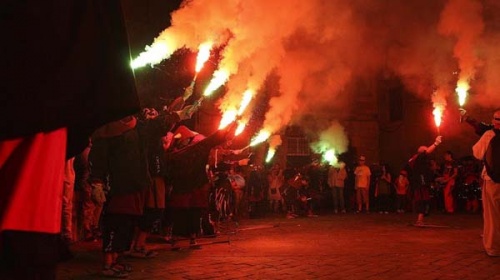 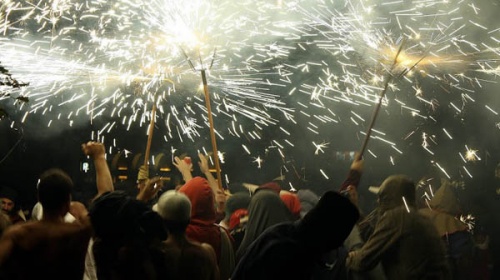