The Diables del Mercadal Infernal were set up in October 2012, with the idea of spreading popular and traditional Catalan culture amongst the people of the city. The group organises activities to encourage a feeling of belonging and boost associations that are aimed particularly at families, while not excluding individual members. In the case of children, though, they do insist on their parents or guardians being members, too.

The children, called Grifons, belong to the children's section of the Mercadal Infernal. The other part is made up of the musicians, the tabalers and grallers who accompany the Diables and the Grifons with their drums and double-reeded instruments, and also perform on their own.

This group's activities go beyond the correfocs and tabalades, the fire runs, drumming, and the other typical fire shows of the colles de diables. They are fully integrated with the other Sant Andreu associations: they take part in events proposed by other associations and organise their own workshops, meetings and charity activities. 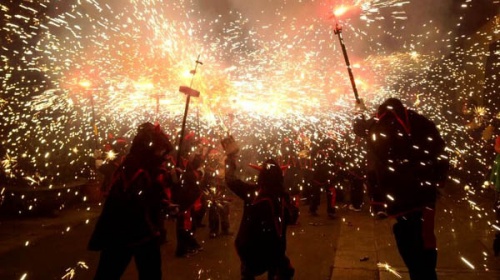