The Dimonis de La Fosca is a devil group that was set up in 2011 and whose members come from the Gràcia neighbourhood in Barcelona and the Fosca neighbourhood in Palamós. Their main goal is to promote traditional Catalan fire festivals and, at the same time, encourage public participation, gender equality and public-spirited behaviour.

The group have two devils' sections, one for adults and one for children. They also have a musicians' section who accompany them on their street performances. They play contemporary melodies based on traditional sounds, with trumpets and drums they have made themselves. The children's devil section has four fire beasts: Llevataps, Garoina, Pirofagus Català and Cranc. 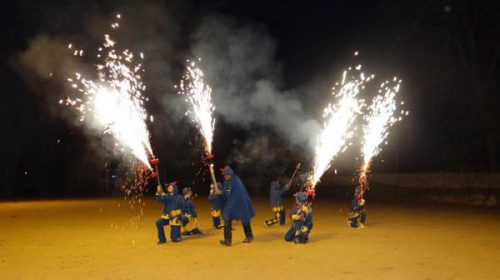