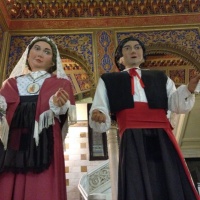 The Caramelles children’s group of Mare de Déu del Coll decided they wanted to make some little giants who, apart from being an incentive for the little singers, would also join in the Coll neighbourhood festivals. The figures were built by the girls and boys with functional diversity from Maria Mullerat school under the supervision of Antoni Borrell.

The Caramelles del Coll fist paraded their little giants in 1985 having christened then Jordi and Maria after the Mare de Déu del Coll and Sant Jordi de Vallcarca churches, although they also go by the names of the Knight of Vallcarca and the Princess of Coll.

They are dressed like the children from the Coll and Vallarca neighbourhoods did years ago to go around singing caramelles. Jordi and Maria have their own dance with the sardana folk dance group ‘Els Gegants del Coll’ (The Giants of Coll) with music by Joan Gibert Canyadell and lyrics by Josep Maria Riera Sala.