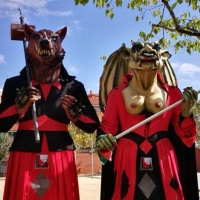 Constructed in 2010 by Toni Mujal

The main distinctive trait about Lilith and Nemrod is that they are the first fire-giant couple in Barcelona. They belong to the Barcelona Coordinating Committee for Fire-Devil and Beast Groups and they represent a pair of devils. Lilith looks like a winged gargoyle, with horns and fangs. She is dressed in red and black – the traditional colours of devils – and bares her breasts. She also carries so much force that she is one of the points where the fireworks can be installed. Nemrod has a wolf's face and is dressed, like his partner, in black and red. His appearance is rounded off with an enormous devil's body.

Lilith and Nemrod were originally another ornamental element of the Porta de l’Infern [Hell’s Gate] that is used for opening the La Mercè festival’s fire-run. But this gate was partially destroyed by an act of vandalism and in 2015 members of the Barcelona Coordinating Committee for Fire-Devil and Beast Groups saved the two figures from oblivion by turning them into giants. Toni Mujal, the very man tasked with created the entire Porta de l’Infern in 2010, was then commissioned with the adaptation work. The couple are hardly put out on display to the public but you can see them every year during the La Mercè festival’s fire run.