Click here to discover all the information of the Festa Major de Gràcia 2022.

All the information of the Festa Major de Gràcia 2021 here.

The town of Gràcia was originally a small farming community which, in the course of the 19th century, underwent a big transformation and became an area of workers and small traders. Barcelona's growth and the implementation of Cerdà's expansion plan meant it was incorporated into the city but it has continued to assert its own characteristics and its own way of doing things.

Gràcia's festa major is regarded as the maximum expression of the neighbourhood's identity and consists of a whole series of celebrations that combine public participation with traditional and popular culture. Residents' associations, split into areas, organise part of the festival, with each one responsible for its own street or square. The result is almost a week of activities in every corner of the old town, thanks to the contribution of the many Gràcia men and women who are involved.

The Fundació Festa Major de Gràcia brings together the associations that decorate the streets and squares and take part in the festival by organising the dances, concerts, workshops, communal meals and so on.

While the reason for holding the festa major in Gràcia is disputed — some attribute it to Sant Roc, others to the Mare de Déu d’Agost, that is, the Assumption of the Virgin Mary — most see it as the Feast of the Assumption because tradition has it that the neighbourhood is dedicated to the Virgin. Still, the Feast of Sant Roc is also celebrated: local residents pay homage to the saint and the Castellers de la Vila de Gràcia dedicate a pilar d’ofrena to him, in other words, a human offering in the form of a pillar of castellers, in the presence of Gràcia's festival figures.

The festival's origins run almost parallel to the town's urban development. The first reference to it is documented in 1817, when a religious gathering at Can Trilla in honour of the Mare de Déu d’Agost was recorded. It became more established in the 19th century and took on a more civic rather than a religious character, with lots of associations and other organisations helping to organise it. 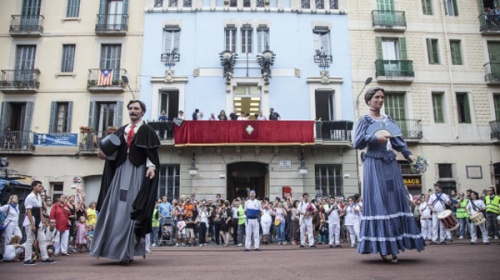 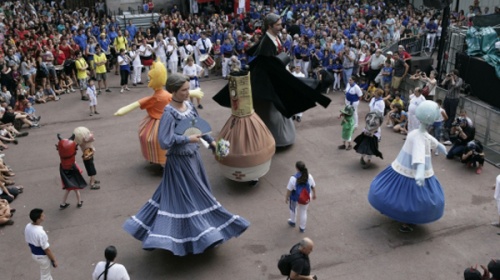 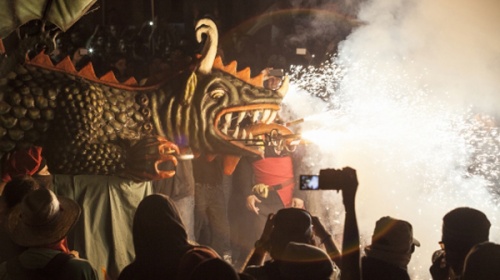 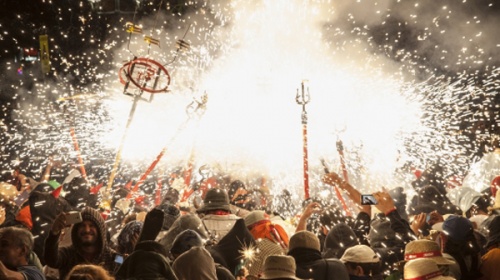 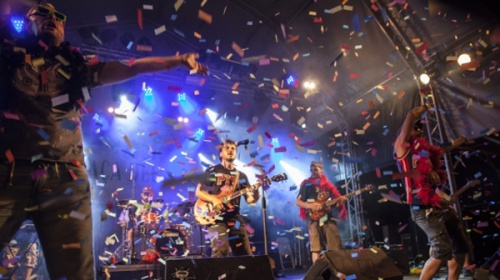 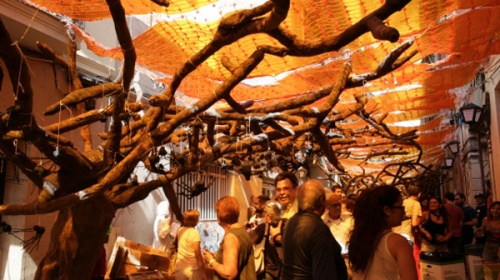 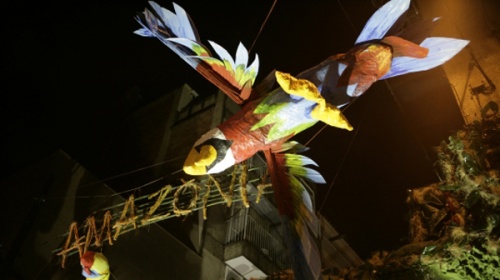 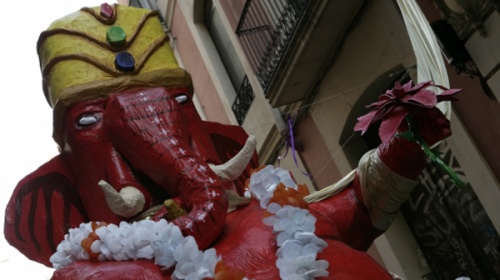 The origin of decorating streets, balconies and doorways can be found in the tradition of decorating public spaces with branches, trees and flowers on important days. In the 19th century this custom gave way to the first simulated scenes, the precedent for the intricate decorations we see today.

Presentation of the T-shirt and the festival streets, squares and other centres. On the Friday closest to the feast of Sant Jaume there is a presentation of the festival venues and T-shirt. It starts with a cercavila, a procession of the Gegants de Gràcia, the smaller gegantó Torres, and the neighbourhood's castellers and trabucaires round the old town streets to the district town hall. There the castellers  build two human pillars to present the new T-shirt,, which is worn by the enxaneta, the child at the top. When they finish, Torres, the star of the event, performs a dance and dons the new T-shirt, which he wears until the next year. The names of the streets and squares acting as festival venues are then announced and, after each one, the Trabucaires de Gràcia fire off a ceremonial salvo with their trabucs from the district town hall balcony. The presentation ceremony is brought to a close with a concert by the Banda Municipal de Barcelona.

Pregó. The festival is officially opened at 7 pm on 14 August with a pregó, a speech from the district town hall balcony in the main square, Plaça de la Vila de Gràcia. A different public figure is chosen each year to be the person who gives it, the pregonera, who is usually accompanied by the authorities and the president of the Festa Major de Gràcia foundation.

Les Matinades. On the morning of the feast day, 15 August, the Matinades de Gralles and the Matinades de Foc parade round the streets and squares announcing the start of the festival. The gralla players come out with the tabalers, drummers, and visit the entrances to the decorated streets, while the colles de foc devils and the trabucaire bandits go on a cercavila round the centre of the neighbourhood.

Seguici de festa major. During the feast day morning, an official parade takes place with maximum representation from all the neighbourhood's festival groups and figures. This seguici, or retinue, sets off from Plaça de la Vila de Gràcia and finishes at the Santa Maria church, where the parish priest awaits them.

Missa de festa major. Although the festivities have had a mainly civic character for years, an Assumption mass is still held. And various colles, local popular culture groups, perform during the religious service, including the gegantons and capgrossos  , smaller giants and big heads. The gegants also do a dance, while the castellers build a pillar of four.

Cercavila de cultura popular. The feast day is packed with displays of popular culture. In the afternoon, a cercavila of groups from Gràcia and all over makes its way round the neighbourhood's streets, with a final display in Plaça de la Vila.

Ofrena a sant Roc. The following day, 16 August, is Sant Roc's feast day and the festival programme includes a host of events that pay homage to the saint. One is a parade from Plaça de la Vila de Gràcia to the Sant Roc chapel (at the crossroads between Carrer de la Fraternitat and Carrer de la Llibertat). Here there are a series of performances: shooting from the Trabucaires de Gràcia and a dance from the Gegants de Gràcia, while the Castellers de Gràcia mount a pillar, with the enxaneta, the child on the top, offering flowers to the saint.

Diada castellera i més actuacions. The castellers play a very important role in the festival programme. The highlight is the Diada Castellera, held on the Sunday closest to 15 August in Plaça de la Vila. This event is hosted by the Castellers de la Vila de Gràcia, with two guest groups also taking part. Aside from their big day, the castellers appear in events such as the festival mass and the floral offering to Sant Roc, where they build specific human pillars (one person per tier), as well as featuring on two other occasions: the pilar caminat, the "walking pillar" from Plaça del Sol to Plaça de la Vila, and the Diada de Vigílies, an evening performance by the Castellers de Gràcia and a guest group. This is held on the eve (vigília) of the festival Sunday.

Dia de les Colles de Cultura de Gràcia. On the third or fourth day of the festival, an event is held in Plaça de la Vila de Gràcia to explain the town's origins and history, until it was annexed by Barcelona. This combines text readings with performances by local popular culture groups.

Decorated streets, balconies and doorways. Gràcia's festa major is famous, among other reasons, for the decoration of its streets, squares and balconies, which their residents work on all year round. Every year there is a big variety of themes using different materials. As this is a key aspect of the festival, a decoration competition is held each year, with a jury made up of figures from the world of creation awarding various prizes, depending on the established categories.

Correfoc. On the last night of the festival there is a big correfoc involving the devils and dragons of Gràcia's colles de diables and their guests. When this fire run ends, in Plaça de la Vila, each group does a presentation. The young devils have their moment of glory a few hours earlier with a correfoc infantil round the streets in the centre of the neighbourhood.