The first performance of the Bastoners de Gràcia was in May 1982, during a Cantaires Muntanyencs' gathering in Teià (Maresme). But the group had been set up in the autumn of 1981. Throughout the years that have followed, they have gradually built up their own repertoire of dances created from popular tunes based largely on Catalan traditions, with some from the Basque Country too. Pride of place goes to "Virolet", a dance recovered from Gràcia folklore and shared by many other towns.

The Bastoners de Gràcia wear a red headband and a short overskirt, which is red too and has a double black band around the edge. They also wear a large check neck scarf, bunched and tied across their chest like a sash. Their waistband is black or red, as are their bell pads, which have 12 little bells hanging from them. The sticks are round and made from holm oak.

You can see the group's dances every year at the annual neighbourhood festa major, which they take part in with the gegants, the diables and the drac - giants, devils and a dragon. They have also given demonstrations and performed in various Catalan towns, occasionally at the La Mercè festivities, at the opening ceremony of the 1982 World Cup and at national gatherings of stick dancers. 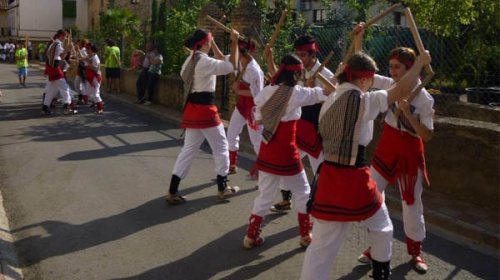 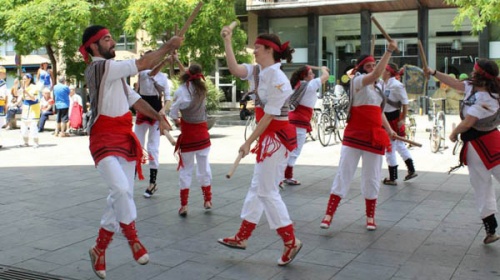