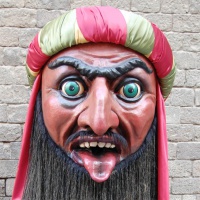 Built in 1988 by
Manel Casserras i Boix

The Carassa ("big face") is a figure closely linked to the Christmas celebrations in the city. Because of his clothes and features he looks like a Saracen. He has a large, thick beard too, and a wide-open mouth to get sweets out of. He moves around on wheels and is unusual because he can blink his eyes.

In the past, these kinds of figures were placed under church organs and it was the organists that made their eyes move and got sweets out of their mouths. Children stood around and grabbed as many as they could. There were carasses all over Catalonia. Some notable examples in Barcelona were those at Santa Maria del Mar, the cathedral – which dates from the 16th century – and Sant Just, which can still be seen in the sacristy.

They formed part of a tradition with strong roots in Catalonia until the middle of the 20th century, when they were removed because of the noise and commotion they caused in churches. The fact they represented the head of a Moor, or Muslim, that had been chopped off also contributed to the decision, because it was seen as an apology for xenophobia and racism.

But in 1988 the image of a carassa reappeared in the city thanks to the Coordinadora de Gegants i Bestiari de Ciutat Vella, who still look after this revived figure today and take it out every year. He was created by the master image-maker Manel Casserras i Boix, who took his inspiration from the cathedral carassa. He was unveiled at Christmas the same year. Now the role of the Carassa is to show the evolution of a tradition that would otherwise have disappeared.

Since his restoration, he has only appeared at weekends in December before Christmas, at the Christmas market, the Fira de Santa Llúcia. He moves between the stalls and goes round the squares and streets around the cathedral, spitting out sweets to the waiting children. Each day he is taken out by a different Ciutat Vella group, who make him dance to shawms and drums.

At all other times, the Carassa de Barcelona can be seen at the permanent exhibition in the Historical Giants Room at the Casa dels Entremesos , Ciutat Vella.