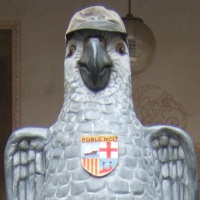 Lloro del 36 is a small giant in the Poblenou giants group, one that represents a popular figure in the neighbourhood customs: the lloro – parrot, today stuffed – that belonged to La Licorera, an off-licence on Carrer del Taulat, just opposite where the tram 36 stop used to be. It is a grey figure with a red tail and a tram driver's cap.

There is a very funny story about the off-licence parrot. They say he learned to imitate the whistle of the line managers, so the tram always left the station early.

The Poblenou giant-carriers came up with the idea of making a smaller giant because they wanted one the children in their group could carry. They commissioned the Terrassa artist Jordi Grau, at the El Drac Petit workshop, to do it and he had it ready for September 1996, just in time to take part in the annual neighbourhood festival, an event the parrot has never missed since.

The Lloro del 36 also appears at the La Mercè and Santa Eulàlia festivals, and other parades and gatherings when invited, where he is always carried by the youngest members of the Colla de Gegants del Poblenou. At other times he can be seen at the Centre d’Imatgeria Festiva Can Saladrigas, where he is permanently displayed with other neighbourhood festival figures.