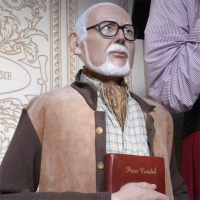 Built in 2007 by
Pere Estadella

Paco Candel, a small giant in the La Marina group, represents a popular writer of that name, who spent a large part of his life in the neighbourhood and fully devoted himself to it. What we see is an elderly intellectual, dressed simply and holding a book with his name on it.

The Geganters i Grallers de la Marina thought of building this gegantó because they wanted a smaller, lighter figure that their youngest members could carry to accompany the big giants. At the same time, they wanted to pay tribute to the writer from Valencia who had settled in the neighbourhood, for the work he left behind and his efforts to improve the living conditions of Marina de Sants' inhabitants.

Thanks to the work of Pere Estadella, the giant figure appeared in 2007. Immediately they set about creating a dance for him based on "The Old Dance", an anonymous folk song played by the group's own shawm players and drummers. You can see Paco at giants' gatherings and dances all over the city.

Normally when he goes out he is accompanied by the other figures in the La Marina comparsa, and they all act as the hosts of the annual neighbourhood festival in honour of the Virgin of the Port, on 8 September.