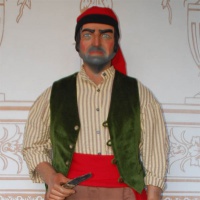 Built in 1995 by
Manel Casserras i Boix

Perot the Thief is a popular small giant from the Santa Maria del Pi parish. He represents Perot Rocaguinarda, the seventeenth-century Oristà highwayman who is said to have stayed in the street now named after him in the Pi neighbourhood when he came to Barcelona.

The idea for making the highwayman came from the Associació d’Amics dels Gegants del Pi, who wanted a smaller, lighter figure that could be carried by the youngest members of the group. So, they decided to build a gegantó with an image that reflected the neighbourhood legend: Perot lo Lladre. When the figure was ready, it was used to honour one of the oldest and most admired giant-carriers in the city, Josep Lluís Esteras.

The master Solsona image-maker Manel Casserras i Boix was given the task of building Perot and he appeared in public for the first time in 1995. That was at the festival in honour of the neighbourhood's patron saint, Sant Josep (St Joseph) Oriol. Since then he has played a key role because he leads one of the biggest crowd-pulling events: the Atracaments de Perot lo Lladre – Perot the Thief's Hold-ups. This involves Perot, accompanied by a retinue of musicians and local people, going round the streets, entering the shops, stealing chocolate coins and sharing them out among the public, who cry: "Perot, Perot, Perot, el nostre lladregot!"

Perot also takes part in other parades and gatherings in the city, especially the La Mercè and Santa Eulàlia festivals, as well as all the Pi giant group's outings, always carried by the youngest carriers. When he's not out, you can visit him at the Casa dels Entremesos, where he is on display along with a large number of other Ciutat Vella festival figures.