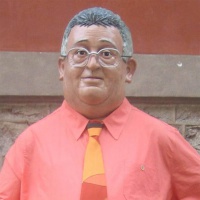 Built in 2007 by
Àngels Jutglar

Torres is a small giant that represents Albert Torres, the former president of the Gràcia festival streets federation. He wears a pinkish shirt and a tie with orange tones, while holding a hanger in his hand with the annual festival T-shirt, which they change each year.

The Federació de la Festa Major de Gràcia (today the Fundació de la Festa Major) came up with the idea of making this figure because they wanted to pay tribute to the man who had been their president for nigh on twenty years. The job was given to Àngels Jutglar, the local artist who had already made other Gràcia figures, and she finished it in 2007. In time for the new Torres to make his first public appearance at the Sant Roc Festival on 16 August.

This small giant has a very important task to perform during the neighbourhood festival: every year he presents the T-shirt designed for the celebrations, as well as the streets, squares and other places that will hold the festival events and activities. All that happens on the last Friday in July. First he does a dance. Then the president of the Gràcia festival federation, the district councillor and the district council chairperson swap the previous year's T-shirt for the new one, and Torres performs another dance.

He is a very prominent figure during the festival, especially the tribute to Sant Roc and the parade.

Torres does not belong to any giants' group so, when he has to go out and dance, a group is set up specially for that purpose. That means, aside from the Gràcia neighbourhood festival, it is rare for him to take part in giants' gatherings or other celebrations.