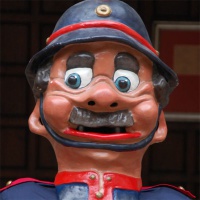 Xavier is a small giant in the Poblenou giants' group in the form of a fireman. He wears a firefighter's helmet and uniform and he has a worried look on his face, as if faced with a fire and not sure how to react. One unusual thing about him is that he can spray water from his mouth over the public while he is moving around.

The idea of making this small giant took shape in the group, who wanted a figure their younger members could carry. They created it from a standard capgròs, or "big head", that had gone out with the big giants for years, and Xavier the Fireman was able to make his first public appearance at the 2011 Poblenou annual festival. Some months later, in April 2012, he was christened at a very special ceremony attended by members of the Barcelona Fire Brigade.

Xavier has a twin, Rogeret, who has exactly the same face but a different uniform and belongs to the Geganters de Montbau.

Xavier is looked after by the Gegants del Poblenou who take him to the neighbourhood annual festival in September, as well as other giants' gatherings and parades round the city. At other times he can be seen at the Centre d’Imatgeria Festiva Can Saladrigas, where he is permanently displayed with other neighbourhood festival figures.