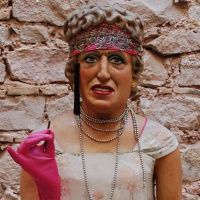 Mary Santpere is a small giant that belongs to the Poble Espanyol parade group. She represents one of the most popular characters on the Barcelona stage: the actress, cabaret star and comedienne better known as the Queen of Paral·lel.

This gegantona was built in 1989 at the Can Boter workshop, in Tiana, and belongs to the company that runs the Poble Espanyol.  Initially she was displayed at the Taverna d’en Benito Vela, but then she was taken to the Poble Espanyol site to go on display with the rest of the park's figures.

She usually goes out with Marcel and Clara, two bigger giantsin the comparsa representing the first visitors to the Poble Espanyol, and four more small giants, Rosalia, Feliu, Paulina and Andreu, who symbolise the four seasons. You can see them in events and celebrations held at the park, as well as any parades or giants' gatherings they are invited to.