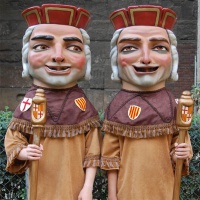 Built in 1985 by
Domènec Umbert

The Capgrossos Macers, also known as the Capgrossos de la Ciutat, are a pair of "big-head" figures that lead the Seguici Popular de Barcelona, alongside the city giants, Jaume I and Violant. The macers are the macebearers of the procession, so their carriers always have a mace in their hand.

They date from 1985, when the geganters or giant-carriers group of the Sant Josep de Calassanç parish commissioned the image-maker Domènec Umbert to make them. They were done the same year and started to accompany the other figures of their colla on their outings.

A few years later, in 1993, the Coordinadora de Geganters de Barcelona and the Coordinadora de Colles de Gegants i Bestiari de la Ciutat Vella asked the Sant Josep de Calassanç group if the Capgrossos Macers could take part in all the outings with the Gegants de la Ciutat. That's how they first became part of the Seguici Popular de Barcelona — the retinue of city giants, beasts and other figures — and acquired a new protocol establishing the events they had to take part in, the music they had to dance to, etc.

The maces they still hold in their hands were restored for this new stage of their career, and the city's coat of arms was painted on them. Eventually they were given to the Coordinadora de Geganters de Barcelona, to take care of them, and they are the people responsible for them today.

The Capgrossos Macers have their own dance, which they premiered in 1999 at the start of the La Mercè festivities, in the Toc d’Inici, an event they appear in every year. They dance a piece called La Gavaldana, by Xavier Padrissa, with a choreography by the Colla Gegantera de Sant Josep de Calassanç.