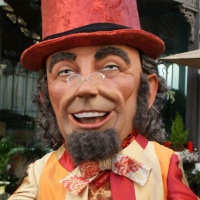 The Esperit de Nadal (Christmas Spirit) is the capgròs, or big-headed figure, in charge of inaugurating a series of pessebres (nativity scenes) in the centre of Barcelona and officially opening the city's Christmas festivities. He belongs to the Associació de Pessebristes de la Ciutat Vella and is this group's first festival figure.

His appearance recalls the face of the main character in A Christmas Carol, by Charles Dickens. Unlike Scrooge, this capgròs has an annually changing nativity scene under his hat. He only reveals it when he finishes his dance or inaugurates a nativity scene. He also carries a walking stick in his hand called the Bastó de Nadal. It has four colours, representing the four seasons, and 12 twelve ribbons, representing the months of the year.

The idea for the Esperit de Nadal came from the Associació de Pessebristes de la Ciutat Vella, who wanted a figure associated with this time of year to liven up the nativity scenes and other events of the festive season. Jordi Grau, the artist at the El Drac Petit  workshop in Terrassa, was given the job of creating the figure, which he did in 2012. Montse Ginesta was in charge of the clothes.

It was on 30th November, 2012, that this new big-headed figure was presented to the Barcelona public and, since then, Esperit de Nadal has only appeared around Christmas time, to take part in cercaviles in the city's different neighbourhoods and liven up the markets, squares and streets. He can also be seen in other activities, such as the switching on of the Christmas lights, the draw for the royal pages in the Three Kings parade, as well as the parade itself, where he says good-bye to the people until the following year.

Esperit del Nadal has his own retinue, consisting of a group of musicians playing Christmas themes on traditional Catalan instruments, and 12 dancers from a Barcelona dancing troupe. He also has his own dance, choreographed by Montserrat Garrich and Anna Bigas.